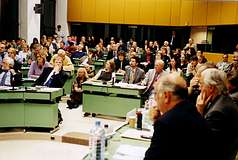 - Should the IGC change the draft Treaty?

- What this would mean for the EU's policies?

- Will the IGC work be an improvement or rather a step backwards?

- What decision should the IGC take on the ratification process?

- Should the Constitution be ratified by unanimity?

The speakers agree that there is a risk for the draft Constitution in its current shape. Mr DE VIGO stresses that the draft Treaty was designed in a way that left no space for options, to avoid the risk that the IGC interfere in the text. However, as the amendments are very likely to occur, according to his words - there is a serious risk for the draft Constitution in its current shape. Mr BARNIER sees the risk in the fact that the IGC may try to diminish the role of the European Convention's work and to build up its own importance by implementing significant changes in the draft. One of the main obstacles in his opinion is the opposing points of view of the Council and of the Commission as to the contents of the Treaty. The two problematic issues are the insufficient extension of the qualified majority voting rule and the composition of the European Commission (the problem of the 'second rank' Commissioners without voting rights).

Daniel KROUPA commented the opinion of the accession countries, which insist on having their own Commissioner in order to defend their national interest in the Commission. From Mr KROUPA's point of view, the European Commission should not be the second Council, as it is to represent the interests of the European Union as a whole, not of the Member States. He also raised the issue of the preamble by saying that if certain countries support Christian values, they should also remember that "God sometimes punishes us in that way that He fulfils our wishes".

As to the ratification process, all speakers agree that referendums in the Member States are necessary to accept the Constitution. Mr BARNIER stresses that the citizens have to be involved in shaping the European Union. However, Mr PALMER added, so far there have never been any consequences for voting 'against' on the European issues. It should be changed, in his opinion. If the Constitution will be rejected in a referendum, the concerned country should leave the European Union.

Once the Constitution is ratified, there is a question of future amendments of its contents. Mr DE VIGO pointed that the draft revision procedure is a result of the best possible compromise of the Convention. Therefore he does not see a chance for improving this article during the IGC, so that unanimity will probably remain as a tool for future revision of the Constitution.

The speakers also agreed that there is a need to build a strong political campaign to defend the draft Treaty. According to Mr PALMER, the key task lies in mobilising the political network so that the draft Constitution cannot be rejected or significantly changed during the IGC. It would also be a very good idea for the European political parties to appoint their candidate for the president of the Commission before the EP elections in June 2004. It is necessary not only to attract the EU citizens' attention, but also to give them a clear political choice.

The debate ended with Mr LEINEN's conclusion that we need a campaign to defend the democratic legitimacy of the Convention and draft Constitution.
Recommend this:
© 2019 Union of European Federalists
Sitemap | Contact | Jobs | Privacy| Search