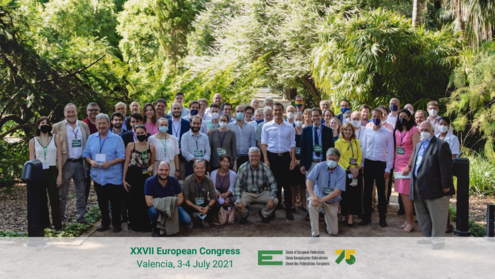 On 3 and 4 July 2021, the time had finally come: after more than a year in online formats, the XXVII European Congress of the UEF at the Jardí Botanique de Valencia offered the possibility of face-to-face meetings for the delegates of the UEF sections and guests. Around half of the 149 registered Delegates and Observers had travelled to Valencia to attend the Congress, which also celebrated the 75th anniversary of the UEF. For the remaining participants, the hybrid format chosen offered an active online participation.

On the eve of the Congress, UEF organised jointly with UEF Spain and the Spinelli Group the Event "On the 80th Anniversary of the Ventotene Manifesto for a Federal Europe". The event was hosted by the Principal of the University of València at the Centre Cultural La Nau of the Universitat de València. The event was attended by distinguished speakers from different institutions at local, national and European level. The debate focused on the Conference on the Future of Europe (CoFoE), which started on 9 May 2021. In the two panels, national and European parliamentarians discussed the federalist strategy in the CoFoE as well as their role in the Conference as an exercise of inclusive and active democracy.

The Congress officially began on Saturday morning with welcoming speeches by, among others, the Principal of the University of Valencia, María Vicenta MESTRE ESCRIVÀ, the Regional Secretary for the European Union and External Relations of the Valencian Regional Government, Joan CALABUIG RULL, as well as the President of UEF Spain and former President of the European Parliament, Enrique BARÓN CRESPO.

Afterwards, Sergio PISTONE recalled in his excellent historical lecture the great moments, the political milestones and achievements of the last 7 ½ decades of the UEF history. Throughout its long history, the UEF has always been ahead of the times and through its actions and campaigns has been instrumental in advancing and shaping the European unification process.

In the subsequent Panel Debate moderated by Raphaël BEZ (Secretary General of UEF Switzerland), UEF President Sandro GOZI, EUD President Rainer WIELAND, JEF President Leonie MARTIN and Daphné GOGOU as Vice-President of UEF Greece (the youngest UEF section) discussed the present and future of UEF. They discussed perspectives for the development of UEF as organisation, but also strategies for organisation development and organisation building in countries where UEF is not yet represented or where federalism has no tradition.

An organisation – like the UEF – is never static but always on the move and has to undergo critical self-reflection at regular intervals. Such a process was started in July 2020. During the first semester of 2020, UEF faced severe internal challenges and was obliged to look for institutional responses in line with the existing provisions on the Statutes. A first deeper analysis of the specific provisions of the UEF Statutes revealed gaps in the description of the tasks allocated to the Organs of the Association as well as the need for a wider revision of key provisions in order to improve the functioning of the UEF and incorporate best practices based on the experience gained by national sections. The COVID crisis and the difficulties to organize in-person meetings and events, as well as the changes in the working environment in all EU Member States were additional factors leading to the revision of Statutes.

Already in July last year, the President and Secretary General had called on the sections to nominate members of their sections for a working group on Statutes and Rules of Procedures. The sections were also given the opportunity to contribute. The Working Group can be seen as good example for cooperation within the association. The group worked in a collective and inclusive way, analyzing the contributions submitted by national sections, identified main gaps, defined the scope of the revision, discussed different options for core provisions and focused on practical and operational solutions. It worked in an intensive way, sharing experiences and conceiving a more effective and modern management of the organization, respecting traditions but also facing the new realities of people mobility and the digital transformation. In this way, a new Statutes could be presented to Congress, making the UEF fit for its purpose and for the future. The new Statutes foresee also the transfer of the registered office to Belgium, a long overdue step. With the adoption of the new Statutes by the Congress the course for a new future is set.

The political focus of the XXVII European Congress of the UEF was the Conference on the Future of Europe. In a video message, Vice-President of the European Commission and Co-Chair of the Executive Committee of the CoFoE Dubravka ŠUICA thanked UEF for organising the Congress and for raising awareness of the objectives of the Conference on the Future of Europe and to involve citizens in the process. She stressed the importance of this, as the Conference was designed for citizens and relies on their input. Likewise, she praised the importance of the informative page of the UEF website on the CoFoE. She reminds that citizens' trust in democracy is important and cannot be taken for granted. The grassroots are important and must be taken into account. The main goal is to strengthen the link between people and the democratic institutions that serve them, in order to reduce the gap between expectations and reality. Democracy faces many challenges, and it is more important than ever to leave no room for disinformation and false narratives to take the place of considered reflection and debate. The video message of Vice-President of the European Commission, Dubravka ŠUICA, can be found here.

Under the heading of the Appeal successfully relaunched on Europe Day 2021, "Our federal Europe - sovereign and democratic" and moderated by Julian PLOTTKA (EUD), UEF President and MEP Sandro GOZI, UEF Vice-President and MEP Domènec RUIZ DEVESA, Luisa TRUMELLINI, newly-elected Vice-President of UEF, discussed with MEP Guy VERHOFSTADT, one of the Co-Chairs of the Executive Board of the CoFoE, why the Conference should be seen as a historic moment for the federalist cause.

Sandro GOZI highlighted the main steps and activities of the UEF in the past year. He stressed the Darwinian moment that society is currently living in. The ability to adapt is necessary to face the new challenges, and it is not the fittest that survives, but the one that adapts better. 75 years after its foundation in Paris in 1946, the UEF has the responsibility to advocate federalism as a solution for peace and cooperation, for a just world, better growth and coexistence. Moreover, he stressed the need to pursue the federalist cause in a new way and under a new light, but without abandoning the institutional issue, which is the key to a better functioning of the European Union. The issues at the heart of the social debate should also be the issues at the heart of the UEF and the federalist debate. The UEF is a member of the Conference on the Future of Europe. The UEF is now part of the process, if the process will be successful, it will also be a success for UEF. The UEF has to be very clear in promoting its ideas, listening to the citizens and being heard. In this context, Sandro GOZI stressed the responsibility of each individual in shaping the debate. The Digital Platform allows everyone to get involved in the discussion. He therefore called on the Congress delegates and all members in the UEF sections to register on the platform and participate actively. In summary, he underlined, that UEF wants a clear and solid follow-up from the institutions for the citizens.

Guy VERHOFSTADT stressed the responsibility of Sandro Gozi, UEF President, and Domènec Ruiz Devesa, UEF Vice-President, as well as the entire UEF, arising from the membership of the Conference on the Future of Europe. He asserts that the way forward is the democratic federalist way. All the founding fathers of the European Union were federalists.

Domènec RUIZ DEVESA confirmed the importance of the national sections, the JEF and the wider UEF network when it comes to supporting federalist actions of the UEF. From a tactical and strategic point of view, he confirmed that the federalist network has not been stronger in recent times than it is now. It comes from all the different political families in the Parliament, thanks to the Spinelli Group, and one third of MEPs are part of the Spinelli Group.

Luisa TRUMELLINI gave the perspective to achieve a strong democratic and sovereign Union. She spoke from the perspective of the national sections, the perspective of the federalist activists. The efforts of the federalists are currently getting recognition. In the past, it was really difficult to keep federalism as a goal. On the occasion of the 75th anniversary of the UEF, 40 years ago, the European Parliament took the decision to prepare the draft treaty under the impetus of Altiero Spinelli, the impetus to create the European Union. At that time, the UEF set up a committee chaired by Francesco Rossolillo to prepare the project of institutional reforms of the European Community. The memory of these events is important to understand, that after 40 years the debate is still on these points. The process is long and the achievements are long to arrive at the final federal structure of the European Union. The need to have an autonomous European Parliament is essential and a game changer for political capacity at the European level.

The UEF has chosen, in addition, an innovative and new form of dialogue on the CoFoE with its latest project "Make Europe Bloom: the Time is Now!", co-funded by the European Parliament, which was officially launched on Europe Day 2021 and had its first mural “For the Future of Europe” inaugurated in Valencia on 3 July 2021. The UEF is discussing the CoFoE with citizens through art as a form of expression and is pleased to have found  Antonyo Marest, an outstanding Spanish urban artist, to implement it. After Valencia, murals will be created in other European cities until June 2022. Here you can find some pictures of the #MakeEuropeBloom mural here.

We kindly ask those sections that have not yet submitted their nominations for the FC to do so immediately and to send an email to the Secretary General, Anna Echterhoff (anna.echterhoff@federalists.eu). Thank you very much.

Furthermore, the following resolutions were adopted:

1. Resolution: Our federal Europe, sovereign and democratic.
2. Resolution: On a systematic approach to European citizenship education.
3. Resolution: Proposal for a resolution on a digital business tax.
4. Resolution: The EU as a global player in the post-COVID 19 era: a stronger common foreign and security policy.
5. Resolution: For a truly common and secure area of free movement and a sustainable EU migration and asylum policy.
6. Resolution: Towards a Common European Policy in the Eastern Mediterranean Region.

UEF takes this opportunity to express its gratitude to UEF Spain for their great support and for hosting the Congress!!