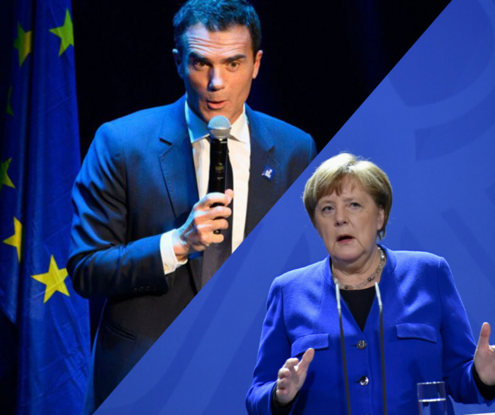 The Netherlands does not understand. Angela Merkel should read De Gasperi again. Urgent measures for €1500 billion are needed, “European Recovery Bonds” included. Without an agreement,  a group of member states could go forward anyhow.

“The definitive agreement will come if Heads of State and Government will find it. In the meantime, making progress in the Eurogroup is essential”. On the phone from Paris, MEP Sandro Gozi condemns those national governments opposed to an agreement. For weeks Gozi has been stressing the urgency to adopt so-called European Recovery Bonds, and with determination he was also able to bring together his liberal democrat group Renew Europe on this line “We need to find an agreement in three months, rather than three years - he said -, guaranteeing additional solidarity to those States that are more in difficulty, as Spain and Italy, and working on the after-crisis, when the EU will have to rebuild its own industrial sovereignty, starting from the pharmaceutical industry, in order not to be dependent on global actors such as China”.

The exhausting night marathon was not enough, and today the Eurogroup will meet again….The problem is that this is an old debate.

Which means?
Dutch, Finnish and Austrians think as we were in the “before Corona” world. But there is no more such European and international framework, because the Coronavirus emergency has redefined scenarios and needs for eveyrbody.

French Minister Le Marie thinks that failure is “unthinkable”. Do you agree with him?
Yes, it would have devastating consequences. It could blow up the whole Single Market, because if you don't give all member states acess to a Fund on equale and fair terms, inequality will explode. Let me explain: if Germany is able to give, as helicopter money, €50 billion to its companies in crisis, how many other states can do it? Moreover, in the new world that the pandemic is shaping up, one instrument will not be enough, but many instruments acting in concert will be needed.

Which ones?
All those under discussion: an ESM without macroeconomic conditions and with simplified procedures, an EIB with increased investment capacity, the ECB, which is already operating in derogation of its quotas to purchase national bonds, since it has purchased €12 billion of Italian securities and only €2  billion of the German ones; and also a fund for Recovery Bonds. Putting it all together, Europe must be able to mobilise resources of €1500 billion.

How do you rate the opening of Berlin?
It seems to me that there is a rapprochement with the French proposal. But the statements of Finance Minister Olaf Scholz are not enough. I remember that Alcide De Gasperi used to say: Europe needs a sense of urgency and foresight. Never as now, Chancellor Angela Merkel should read again De Gasperi and, instead of acting as a mutti for her 'German constituency', she should aim high, coming close to Macron’s positions and showing European generosity.

Are you confident that Germany will move?
With France, Italy and Spain in tune, I think there is a chance to convince Germany. And if so, we could get a yes from the whole eurozone, including the Netherlands.

What if they still hesitate?
If there is no unanimity, I think a group of countries should go ahead anyway, starting the recovery bonds with those who are in. Of course, it's not the best way. But, if necessary, it will have to be done.

English translation of an article in Italian