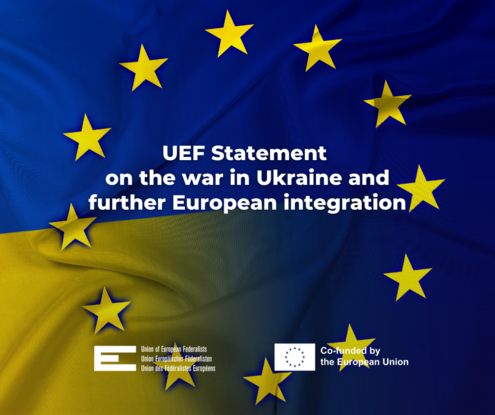 The pandemic and Putin´s aggression to Ukraine have ushered a new era for Europe. This calls for a more proactive European action in different policy fields, such as health, economic and social recovery, foreign policy, defence and security, energy, and migration, among others.

In this regard, the Conference on the future of Europe becomes even more relevant after the pandemic and war shocks. New necessary unions in the health, defence, energy, migration, financial and fiscal domain, call for a stronger, federal political union as a necessary condition to fully underpin them.

Therefore, the Union faces two urgent and fundamental tasks. The first is to fully support Ukraine, by providing military, economic and humanitarian aid. The second is to complete the political unification of Europe through a process of federalisation.

Defending Ukraine and the implications of the war in Europe

Thus, the Union of European Federalists:

1. Deplores the Russian aggression of Ukraine; supports the strong and swift diplomatic, political, financial, and security measures undertaken by the EU, particularly the UNGA resolutions, the punitive measures on the Russian economy and Central Bank reserves, and the delivery of military equipment to Ukraine.

2. Deplores the Lukashenka’s regime support for Russian aggression against Ukraine, using Belarus territory and infrastructure, and calls for the strengthening of the sanctions already imposed against Belarus.

3. Encourages Member States and the European Commission to scale up - where deemed necessary - multisectoral sanctions and to fix all possible implementation loopholes for those measures that are already into force.

4.Points out that the continuous reliance of Europe on Russian gas and energy indirectly contributes to finance the Russian invasion of Ukraine. Consequently, it is of the utmost importance to put an end to European energy dependency as soon as possible; calls for an immediate ban on imports of fossil fuels and raw materials from the Russian Federation, in order to undermine the Russian financing of its war efforts.

5. Urges the Member States to uphold the supply of military and intelligence capabilities to Ukraine, and in particular of fighter jets and anti-aircraft weapons.

6. Declares that the Union should not cease its efforts to bring the perpetrators of war crimes to international justice, including all responsible officers within the chain of command; urges international organisations to activate all the available justice mechanisms in this regard; express its support to the  ICC and the Office of the Prosecutor’s investigation and to the safe collection of evidence on the ground to independently assess whether war crimes and crimes against humanity were perpetrated, and calls  to increase financial support, and voluntary secondment of experts ; calls for the establishment of a Special Tribunal for the Punishment of the Crime of Aggression against Ukraine; urges the extension of the conflict monitoring mechanism in order to support civilians in Ukraine, helping to prevent further escalation and better anticipate harm from military operations; supports the Ukrainian authorities to track disappearances during the war by raising awareness about international humanitarian law.

7. Stands in support of the millions of refugees of the Ukrainian war; praises the Commission and the Council for the expeditious activation of the temporary Protection Directive; urges the Commission and the Member States to develop stronger coordination mechanisms to ensure that all  human and social rights (such as access to work, health, schooling or housing) conferred by it to Ukrainian refugees are effectively ensured; affirms that without well-balanced relocation mechanisms, countries at the forefront of the reception of refugees will not be able to provide for the needs of Ukrainians in need of international protection; calls for solidarity and relocation to be made effective under the coordination of the Commission.

8. Affirms that there can be no possible trade-off between the compliance with the EU values of democracy, respect of human rights and rule of law, and the moral obligation of welcoming refugees; considers it necessary to widen the scope of application of the conditionality regulation and to ensure its proper enforcement.

9. Concludes that the costs arising from Russia´s war of aggression on Ukraine for European citizens require additional and substantial investment and financial support to minimise surges in in the cost of living, in energy prices, but also for continued financial, humanitarian, and military support to Ukraine; points out that the provision of decent shelter, of schooling and other essential services to  more than 3.4 million refugees will also require the deployment of additional European funds.

10. Stands with Ukraine, Georgia and Moldova, which are currently  confronted with continuous attacks and threats by Russia; considers that the Commission should expedite its opinion on the granting of the candidate country status to Ukraine.

11. Stands in solidarity with the Russian opposition, Russian civil society and the courageous Russians citizens opposing the war; calls to provide further support to the Russian democratic opposition and civil society organisations, including additional multi-entry visas for long period of validity for civic and political activists opposing Putin’s regime.

12. Calls on the EU Member States to facilitate the opening of humanitarian corridors inside Ukraine’s territory, in particular through the United Nations mechanism, to allow civilians’ safe passage out of the zones affected by military operations, and of the territories unlawfully occupied and controlled by the Russian Federation; supports as well the declaration of a no-fly zone in the skies over the corridors, over Ukraine’s nuclear power plants and nuclear waste storage facilities.

Towards a new Europe

Therefore, the Union of European Federalists:

13. Urges to fully exploit the potential of the Lisbon Treaty, with the purpose of guaranteeing the proper implementation of Union’s policies, thanks to the activation of passerelle clauses to overcome unanimity voting in the Council in the field of Foreign and Security Policy, Social Policy, and of taxation, and extending Qualified majority decision and ending national vetoes.

14. Calls for the relaunch of the Energy Union; reiterates its support to the rapid phase-out of the energy dependence on Russian natural gas, oil, and coal; welcomes the new Repower EU Communication; underlines the need for a prompt diversification of energy supply sources, developing centralised gas purchases and strategic reserves at the EU level, promoting more efficient energy interconnections at European and international level, particularly for natural, liquefied gas and hydrogen, and decoupling energy prices from final prices paid by consumers; believes that there is a need to redouble the efforts to develop renewable energies (in particular green hydrogen) as the best way forward to guarantee energy autonomy, and thereby accelerating the implementation of the European Green Deal.

15. Deplores that a two-tier system of refugees’ protection is emerging in Europe between Ukrainian citizens and non-Ukrainian nationals; recognises that all refugees should be entitled to the same rights; rejects mandatory relocation as one-off measures, and calls for solidarity to underpin the proposed New Pact on Asylum and Migration; urges the Council to speed up the current negotiations on a mechanism based on the principle solidarity and on relocations, towards the creation of a new sustainable European Asylum Union.

16. Calls upon the European Council to fast track the development of a first embryo of Defence Union, to ensure the safety of European citizens and the longstanding commitment of the European Union to uphold peace, if possible by activating article 42.2 TEU and constituting the Rapid Reaction Force proposed by the Strategic Compass;

17. Highlights that the current 2021-2027 long-term EU budget and the Next Generation EU will not provide sufficient resources to achieve the abovementioned goals; Notes that  the mobilisation of already committed resources poses at risk the strategic objectives of the Union, including the financing of new energy, migration, asylum and defence unions; calls therefore to make the European Recovery (and Resilience) Plan permanent, and  to complement it with additional resources financed through new EU bonds to finance the new unions and the European Green Deal.

18. In this regard, reiterates the need to urgently progress towards a federal political union, where Parliament and Council will negotiate on an equal footing on the EU budget and its financing, including on EU debt, and on European taxation.

19. Believes that the magnitude of the challenges ahead will require all democratic institutions to conceive innovative and unprecedented solutions; reiterates thus the need to empower the European Parliament with the right to initiate legislation, and with increasing fiscal prerogatives; calls for the extension of the Ordinary Legislative Procedure to all the Union’s policy areas.

20. Calls for the holding up of a Convention in the short-term to grant a proper follow-up to the deliberations of the Conference on the Future of Europe, to ensure  a reform of the Treaties and to launch the creation of a sovereign and democratic European Federation; recognises the need to consolidate the new competences and policy instruments, and to confer stronger democratic legitimacy to the new European Union through the adoption of a Federal Constitution allowing for the full involvement of the European Parliament in all policy areas.