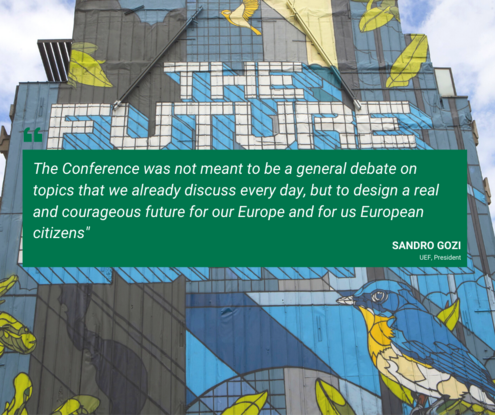 “The Conference was not meant to be a general debate on topics that we already discuss every day, but to design a real and courageous future for our Europe and for us European citizens!”, states UEF President Sandro GOZI.

In a meeting of the EU ambassadors, the Member States adopted their revised position on the Conference on the Future of Europe on 3 February. The document was proposed by the Portuguese Presidency.

"It seems that the Council does not understand: the Conference on the Future of Europe, as envisaged by the European Parliament is more necessary than ever. The methods for direct citizen participation are disappointing", assesses GOZI. "Where have the citizens’ agoras that the Parliament proposed gone?" asks GOZI. "There also seems to be a 'Chinese wall' between the Conference and Article 48 on treaty revision".

"Clearly, the Council is making a mistake by not being bold enough on the governance, functioning of the Conference and new methods of citizens participation. This is not what we federalists were looking for", says GOZI. "Unfortunately, this seems to be the only possible way out after the Council refused to agree to the solution proposed by the European Parliament", regrets GOZI. "Two are the most important things now: to make sure that it’s the Parliament's representative in the executive committee who leads the work of the Conference and, more specifically, that of the Plenary. But above all, we need to keep advocating for the outcome of the Conference to be totally open in terms of possible new policies and Treaty revisions", concludes GOZI.