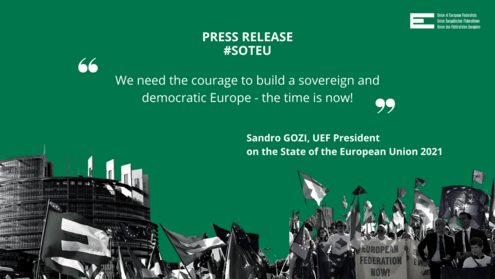 In her State of the Union Speech, the President of the European Commission, Ursula von der Leyen, takes stock of the European policies of the past year and sets out the priorities for work in 2022.

In her State of the Union Speech, the President of the European Commission first referred to the most important developments and successes of the past year. These include, among others, the measures to overcome the health crisis. Despite considerable criticism at the beginning, 70 percent of the adult EU population have already been fully vaccinated against the coronavirus by the end of August 2021. The European Commission has also procured enough COVID-19 vaccine doses to cover the entire EU population and other parts of the world.

She also referred to the European economic recovery plan, NextGenerationEU, which sets the framework for a greener, fairer and more digitalised post-crisis economy and which will reshape Europe for the next decades. The first European climate law will write into law the European Green Deal's goal of achieving climate neutrality by 2050 and reducing greenhouse gas emissions by at least 55 per cent by 2030, making Europe's economy and society climate neutral by 2050.

After one of the toughest years in its history, Europe needs to look towards the future with renewed hope. In the coming months, the European Commission will therefore focus on the following priorities:

“The Union of European Federalists (UEF) welcomes the assessment made by Commission President Ursula von der Leyen: the attention to young people, first of all, because the European project is primarily about securing their future; the attention to security, in all its aspects, social, health, geopolitical. Then, the reference to the greatest merit in the past year, which is undoubtedly in the area of combating the economic consequences of the pandemic with the multi-billion financial package, the recovery fund. And, as the tragedy unfolding in Afghanistan shows, the proposal for the European Union to initiate the development of a true European Defence Union and to set up quickly an autonomous rapid reaction force. However, as European Federalists, we need also to stress the need of deepening European integration. The past year’s crisis made very visible the need for a more united Europe. Hence, we can’t miss the opportunity to make the Conference on the Future of Europe a true forum with citizens to work together to achieve a more sovereign and democratic Europe.”  says UEF President and MEP Sandro Gozi.

"We urgently need a strong, legitimate, and properly financed political Union that can tackle the great transnational challenges of our time, acting decisively in a wide range of policy areas, from climate change, growing social inequalities, health and migration to foreign affairs and defence. That is why we must be ready to move forward by a majority, without letting ourselves be stopped by the states that want to paralyse the Union, from migration policy to the other dossiers that are essential if we are to regain control of our own destiny.“ the UEF President firmly underlines.

UEF with its member sections and over 30.000 members from all 27 EU member states is not alone with its positions. This spring, together with the Spinelli Group and the European Movement International, UEF published the Appeal „Our federal Europe - sovereign and democratic“ signed by more than 500 high-ranking personalities from all over Europe, and it is still open for signatures: Every citizen is invited to join the Appeal by signing it. The appeal is available here.