MAKE EUROPE BLOOM: the Time is Now! (project website: https://bit.ly/MakeEuropeBloom) is a project organised by the Union of European Federalists and co-funded by the European Parliament.

This project is being carried out in the context of a political campaign at both European and national levels to raise awareness on the importance of the Conference on the Future of Europe (CoFoE), as a framework in which to advance the reforms that can create the conditions and changes that citizens are demanding.

Officially launched on Europe Day 2021 together with our Appeal "Our Federal Europe: sovereign and democratic", MAKE EUROPE BLOOM: the Time is Now! is carrying out activities in different European cities. Murals are being created until June 2022 all across Europe.

Building on President of the Commission Ursula von der Leyen’s 2020 State of the Union speech, this project is also contributing to setting up the new European Bauhaus by mirroring citizens’ feelings on Europe through art.

In order to meet our innovative approach, we count on renown urban artists that accompany us to the locations helping us to make Europe bloom with their art. Our idea is based on replicating a series of the large-scale “The Future is Europe” mural on Rue de la Loi in the European neighbourhood of Brussels. This time, the murals are being drawn in places where EU-related conversations do not normally happen.

From Creation to Dissemination

1. PRE-PRODUCTION: an online survey is distributed to local and intergenerational participants, local artists and those who wish to participate in this activity through our national sections and partners. Artists then create something from the results of the survey;

2. PRODUCTION: the mural is finalised with the participation of locals. UEF liaises with local authorities, EP (liaison) offices, chambers of commerce and local private entities in order to place the murals in the most effective and visible places.

Venues that host the murals are visited by Members of the European Parliament (MEPs), national decision makers and representatives from civil society. A cross-party group of MEPs, especially members of UEF Europe and The Spinelli Group in the European Parliament, and those from the country or region concerned are encouraged to participate in each local event.

A final report will be written and translated into English, French, German, Spanish, Italian and the local languages of the events. The final content will be shared and disseminated in our network. Likewise, we plan to organise an exhibition in the European Parliament with the graphic content from this project, making into a virtual exhibition on our website.

Doing so will not we only bring Conference on the Future of Europe (#CoFoE) debates to locations where they do not normally take place, it will also serve our organisation, huge networks of our own sections, our partner CSOs, and the European Parliament to identify citizens’ political needs and how to communicate them better in the EU bubble.

The four murals are painted in: 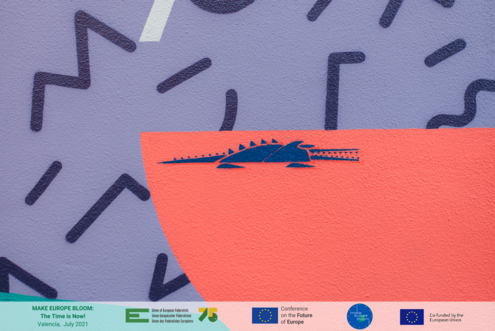