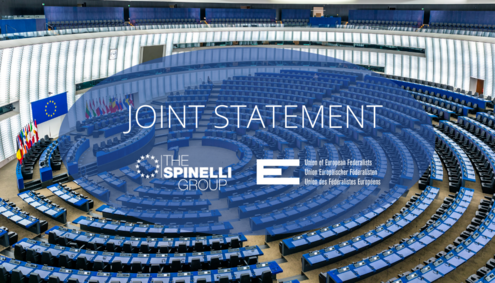 The Spinelli Group, the network of the federalist and pro-reform members of the European Parliament, and the Union of the European Federalist (UEF), reacting to the joint statement of 26th November 2020 by Prime Ministers of Poland and Hungary, Mateusz Morawiecki and Viktor Orbán, have decided to issue a joint statement on the new EU Rule of Law mechanism and the MFF/Next Generation EU package deal.

“We stand firmly behind the deal agreed by the co-legislators, the European Parliament and the Council, on 10 November 2020. Parliament and Council are the budgetary authorities of the EU, not the European Council” declared Brando Benifei, President of the Spinelli Group and Sandro Gozi, UEF President.

“We condemn the behaviour of the Polish and Hungarian governments which are threatening to veto the Multiannual Financial Framework and block the launch of the Recovery Plan for Europe in the midst of the worse health and economic crisis in the EU’s history. COVID-19 has caused more than 300 thousand deaths in the EU and a GDP contraction of approximately 8 percentage points with enormous job losses, business closures and a dramatic worsening of social conditions across the EU”, they continue.

“We recall that the Rule of Law is a non-negotiable, fundamental value of the EU. We reject the interpretation by the Prime Ministers of Poland and Hungary that the proposed mechanism on the Rule of Law would circumvent the Treaties. It not only an absurd contradiction in terms, but also a legally inconsistent argument."

“We also wish to propose a two-track process to overcome the deadlock: first, to immediately approve the MFF, the Recovery and Resilience Facility and the Rule of Law Mechanism, and second, to immediately start the Conference on the Future of Europe. This would allow us to prepare proposals on how to end unanimity rules on the EU’s budget decisions.

“Lastly, we also call to take the appropriate procedures to negotiate the necessary modifications to the Treaties. This should be initiated with the launch of a Convention following the outcome of the Conference."