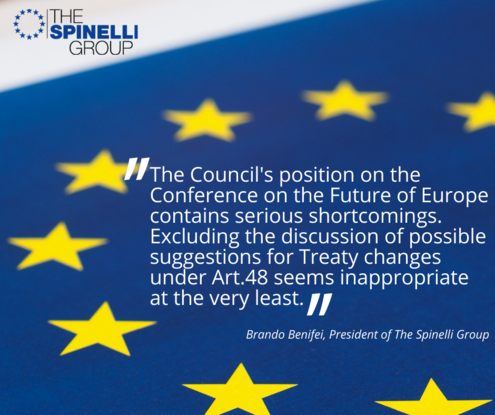 "I express my deep concern about the recent developments on the Conference on the Future of Europe, following the recently published revised Council position, which is object of discussions in the negotiations between the EU institutions in these hours”.

“While I very much believe that the Conference should start immediately, at the same time the Council document contains serious shortcomings in terms of governance, mandate, and contents. The envisaged methods for direct participation from citizens appear insufficient, and it is inappropriate, at the very least, excluding from the discussion possible suggestions for Treaty change. The outcome of the Conference should be reflected in a report to be discussed by all EU Institutions on an equal and balanced manner and not by the European Council only."

“The Conference on the Future of Europe shall be about citizens and their voices in Europe, but inadequate involvement of citizens in the process, offering them the chance to provide input or evaluate output in a meaningful manner, would seriously risk jeopardising the whole aim of the Conference."

“Important issues also emerge on the leadership of the Conference. In this respect, it is imperative that the European Parliament, being the only institution enjoying direct expression from the citizens, occupies a central role. I believe that all political groups shall be represented adequately in the body that decides on fundamental details on the way the Conference is organised and how citizens will actually be involved."

The Board of the Spinelli Group is gathering on Wednesday 10 February to discuss its official position on the matter and will submit its considerations on the Joint Declaration and the Conference on the Future of Europe to the institutions’ negotiators and the press.