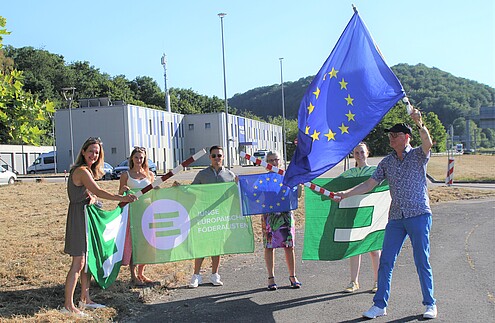 "On 6 August, we remember the demonstration of 300 students from different European countries at the German-French border in St. Germanshof/Wissembourg 70 years ago. The young people sawed the border trees there and called for the opening of the borders and a united Europe," says Sandro Gozi, President of the Union of European Federalists (UEF) and Member of the European Parliament. “For young people, open borders are now normality. But the Corona pandemic this spring has briefly upset this normality, which the Schengen area has offered us since 25 years.”

“The border regions have suffered particularly badly during this period. Nowhere else can Europe be experienced and felt on a daily basis and has already grown together as much as in the border regions. Border closures have not only led to considerable economic damage, to considerably impair of the mobility of hundreds of thousands of border commuters, but also to separation of whole families. Good neighbourly trust has been damaged. This must not happen again and it will not happen again," Sandro Gozi is convinced. "The corona virus knows no borders and cannot be contained by closing internal borders.”

“The pandemic has become a stress test for Europe," continues Sandro Gozi. "The crisis can only be overcome by joint European action. As the Press Release states there can no longer be any national go-it-alone initiatives by the Member States and if limited restrictions on rights and freedoms can be considered temporarily necessary to protect against the epidemic, they must be implemented in the form of coordinated European measures. Priority must be given to cross-border initiatives to prevent or contain the pandemic“.

"The crisis can only be overcome by joint European action” concludes Sandro Gozi. “Against this background, the UEF welcomed the agreement of the European Council on 21 July 2020 to introduce the new Next Generation EU fund proposed by the European Commission as one expression of European solidarity. However, the crisis also shows us the urgent need for reform of the European Union. It is therefore time to reopen the construction site of the Treaties and to give strong support to the political-institutional reforms which will make it possible, first of all, to give the European Union a fiscal competence and to move towards political union through a profound reform of the European Union, without being held up by those for whom the new vision of Europe is not yet mature, but to organise the Conference on the Future of Europe along these lines. This is where also the border regions have an important role to play.”

*The Saarland section of the European Federalists re-enacted scences from that historical day for the European unification at the main French-German border crossing point "Brême d'Or / Goldene Bremm" between Saarbruecken and Forbach. (photo: Werner Hillen/Europa-Union Saar).