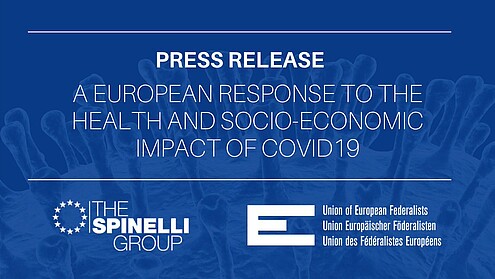 We understand that Covid-19 is a common threat that may hurt one country sooner than another, but will eventually hurt us all, and can impact our daily life and economy almost like a war.

We consider that this current challenge, the most difficult one Europe and the world are facing since 1945, comes just a few weeks before the 70th Anniversary of the Schuman Declaration; like then, our ambition should be commensurate to the scale of the public health and economic crisis we are facing;

We warn of the further negative effects that un-coordinated national responses would have onEuropeans’ health and on the EU’s economy.

We recall that the interdependence between EU societies requires a single European answer with strict containment measures of the pandemics, and an EU-wide plan to support the Member States’efforts in the short term as well as to relaunch its economic growth afterwards.

We regret that the EU is currently ill equipped to face this challenge, with little competences and powers to ensure an efficient answer to the sanitary crisis.

We welcome the timely decision by the Commission to provide 37 billion euro and financial flexibility to cope with this threat. Maybe it is the most it can do, but it is not enough.

We welcome the decisions of the European Central Bank of 12 and 18th March, particularly as it regards the combined 850 billion euro package of purchases of government and corporate bonds;

We call on the European Commission and Parliament to propose, and on the national governmentsto adopt (starting with the extraordinary European Council on March 26th) the following urgent measures:

1. Decide to enhance the EU's coordination and support role in matters of public health, particularly in terms of ability to fight against pandemics – possibly making public health a shared EU competence, eventually through a revision of the Treaties – and to exploit art. 168 TFEU, whichalready foresees (art. 168§5 TFEU) that certain matters of public health (such as the fight againstand prevention of great scourges, which are transnational in nature) be decided upon through the ordinary legislative procedure, and art. 222 TFEU, which foresees for the principle of mutual assistance in case of natural or man-made disaster, to the full.

2. Entrust the Commission with all necessary powers to effectively coordinate the response to the pandemic, including common European rules to limit and overcome the crisis, organise andmanage the most effective use of the necessary pharmaceutical resources and health equipment, and any decision relating to the restriction of the free movement of persons within the European Union, while safeguarding the possibility of articulating specific measures for the various countries on the basis of the different situations.

3. Extend the aims of the European Stability Mechanism in order to allow its use without conditionality to finance the immediate strengthening of European and national health systems to deal with the pandemic, which is a threat to public health and also to the economic and financial stability of the EU.

4. Creation of European Health Bonds, issued by the Commission specifically targeting themember states’ efforts in addressing the health emergency, using the ESM capital as a guarantee.

5. Issue by the Union of an EU RECOVERY BOND in the form of a mutualised European Safe Asset managed by the Commission and guaranteed by the EU budget, that could be used initially to finance a pan-European plan for the promotion of economic recovery and social cohesion in the face of the pandemic, as well as to finance the Green Deal, which involves huge investments to radically transform European society and production.

6. Rapidly adopt the Multiannual Financial Framework, by increasing the EU budget to at least 1.3% of European GDP, as requested by the European Parliament, based on the current structure of budget financing; and with the forecast to reach 2% with new own resources, in order to ensure the provision of crucial European public goods, such as the fight against the pandemic, economic recovery and social cohesion, the Green Deal, management of migration flows and security and defence.

7. Establish genuine, new own resources - such as taxes (and tariffs) on carbon emissions at the EU border and the revenue from the EU Emission Trading Scheme and its extension, taxes on the income of companies in the digital economy, taxes on speculative financial transactions, profits of the ECB - accrue directly to the European budget, as they are transnational in nature and cannot readily be assigned to any Member State; that, alternatively, these taxes accrue to the budgetary instrument of the euro area, if the decision could be adopted only at euro area level, on the basis of the provisions of art. 136 TFEU.

8. Proceed without delay to the completion of the Economic and Monetary Union, starting from the proposals contained in the Reports of the 4 Presidents of 2012 and the 5 Presidents of 2015; in the Commission Blueprint of 2011, in the various Commission Communications of 6/12/2017 and 15/1/2019; in the Resolutions of the European Parliament on improving the functioning of the European Union by exploiting the potential of the Lisbon Treaty of 16/2/2017, on the Possible evolution and adaptation of the current institutional structure of the European Union of 16/2/2017, Budgetary capacity of the Eurozone of 16/2/2017, on the State of the debate on the future of Europe of 13/2/2019, particularly as it regards the common European Deposit Insurance and the Euro area budget.

11. Approve through the general passerelle clause (art. 48 §7 TEU) the transition of fiscal and tax issues to the ordinary legislative procedure, as already proposed also by the European Commission in 2019, with the aim of creating new taxes harmonised at EU level;

12. Agree on a Joint Inter-Institutional Declaration by 9 May for the launching of the Conference on the Future of Europe, in order to pave the way for a European Convention to draw up a new Constitutional Pact between European citizens and the Member States for a stronger and more cohesive political union, in the light of the proposals expressed and recalled here, to ensure full democratic accountability.

Download the Statement of The Spinelli Group and of the Union of European Federalists (UEF) ona European response to address the health and socio-economic impact of COVID19.