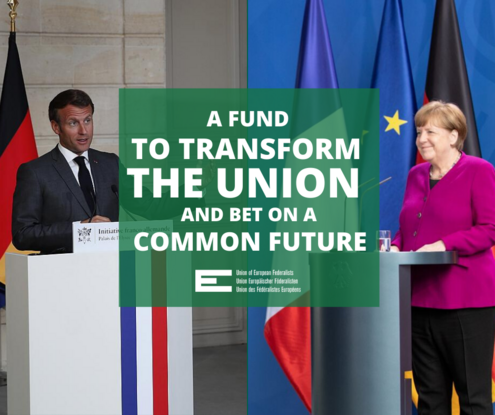 Yesterday’s proposal by France and Germany for a €500 billion Recovery Fund to address the economic consequences of the coronavirus crisis is finally opening the doors for a real European response to the economic crisis caused by the pandemic and can be the beginning of a real fiscal Union.

"A Recovery Fund, financed through the issuance of EU debt, backed by the possible introduction of new EU taxes on digital giants, big firms and polluters, and used for a direct European economic response to the crisis through the EU budget, has the potential to transform our Union fundamentally” - says SANDRO GOZI, President of the Union of European Federalists - "Europe is finally getting serious with a fund of the considerable size of €500bn, real “new money”, nor recycled funds or financial engineering. Issuing European debt in such a proportion recognises the principle that European public goods require European financing and European actions. It is a real revolution that Germany has recognised the advantage of common European borrowing. It implies rebuilding common trust and bet on a common future. It is also crucial that the money will be provided as spending under the EU budget and grants, not loans to member states that would only cripple national finances. This is European solidarity which in the long run will benefit every European citizen. The Fund will change fundamentally the way the European Union finances itself. It will be a precedent for the future and can pave the way to further and deeper EU reforms".

“Focusing the use of the Recovery Fund to finance the green and digital transition everywhere in Europe and make it a permanent and not a temporary instrument would further increase its potential to make the Union stronger than before.  The European Green Deal and Digital Pact can be our new “Coal and Steel” of this century, almost 70 years from the Treaty of Paris” concluded Sandro GOZI. “We encourage the other EU institutions and member states to endorse the proposals submitted by France and Germany and move to a fast implementation of the Fund in 2020” .