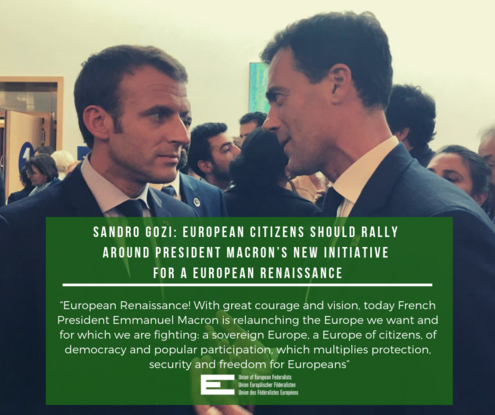 Sandro GOZI, President of the Union of European Federalists, welcomes President Macron’s new initiative for a European renaissance, a direct letter to the citizens of  Europe, published today on a number of European newspapers and invites European citizens to mobilise and support it.

“European Renaissance! With great courage and vision, today French President Emmanuel Macron is relaunching the Europe we want and for which we are fighting: a sovereign Europe, a Europe of citizens, of democracy and popular participation, which multiplies protection, security and freedom for Europeans.

Guaranteed minimum salary, new industrial policy, common defence, bank for climate, European right of asylum and common control of Europe external border: these are very concrete proposals, we have been proposing them for a long time and they respond to the new needs of European citizens.

A European Renaissance without taboos, and therefore including also a revision of the Treaties, with a new and strong popular participation from the beginning. A Conference for Europe, with representatives of the European institutions and the Member States, should be gathered before year-end, to prepare a roadmap for this political project. This is the only way for a real re-foundation of Europe.

We must now mobilise citizens across the continent to make these proposals a reality as soon as possible. We European Federalists are ready and will play our part in all the Member States of the Union”.

Read the letter in all European languages here.

This Press Release is available in the following languages for download: