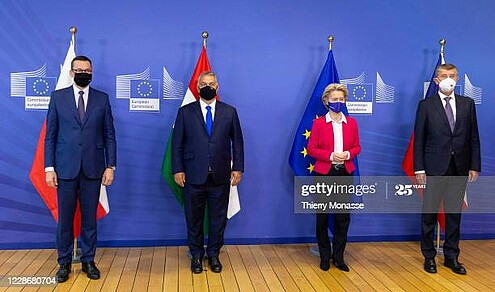 The simple fact is: If you ask to join a club, you respect the rules that all members have given themselves. If you don't like those rules, either you leave the club, or you try to change them with the support of the majority of the members.

Among the rules that the European Union has set itself since its inception is respect for fundamental rights, democratic freedoms, independence of information and the judiciary, and the fight against corruption.

Poland and Hungary have joined the EU club, claiming mainly economic benefits of membership, but they do no longer want to comply with the rules laid down in Article 2 of the Treaty.

This inadmissible position also finds the support of sovereignists in the rest of Europe, starting with Italy: at best, useful idiots of Orbán or PiS, who go against the interests of our country. Italian first, they say! Their only and true objective, often even declared, is to destroy the European Union. Salvini exalts Orbán, Tajani's European ally, while Orbán goes against Italy on the Recovery plan and immigration; Meloni chairs the European party with the Poles of the PiS who deny women the right to choose abortion.

They will not prevail. In a recent survey 77% of European citizens said they are in favour of denying EU funds to those who violate rule of law. The majority: also in Italy, Poland and Hungary. As always, citizens are much more sensitive to the respect for freedoms than various governments that remain silent and that justify and defend the serious violations perpetrated by some governments allied to them.

The European Union was created to guarantee to our peoples freedom, peace and democracy. Those who do not respect and recognise all of this are out of history and lead themselves out of Europe.

All of this is a bluff: Poles, Hungarians and their nationalist allies were there. And if they do not give in, we will go ahead with governments and peoples who want to protect rights and democracy.

This Article was firstly published in Italian on the Huffington Post Blog, 19 November 2020 you can read the Italian version here.