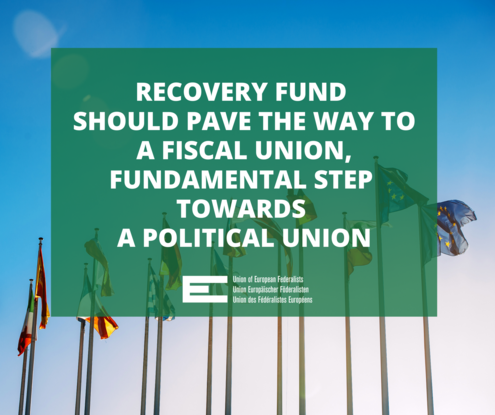 The ongoing discussion on the creation of new financial instruments to address the social and economic impact of the COVID-19 crisis, and in particular the recent joint proposals by the French and German governments for a EUR 500 billion Recovery Fund funded by the issuance of European debt calls for a radical change in the European Union’s budget.

Sandro GOZI, MEP, President of the Union of European Federalists, stated today “The most urgent issue is certainly the creation of European resources so that the European Union can issued debt without asking higher contributions from Member States but establishing new financial resources at European level, in particular focusing on digital and financial giants and on polluters.  This is the only way to ensure that any debt issued by the European Union can be guaranteed by and eventually repaid by the EU budget and does not have to rely on direct or indirect guarantees by Member States and their ability to repay such debt”.

To this end, however, it is essential to reform the Treaties, and in particular the decision-making on the establishment of new European sources of revenues amending only a few specific articles of the Treaties to ensure that the European Parliament and the Council by majority vote can establish Union's own resources and at the same time eliminating the need for agreement by the national parliament of the Member States.

Such a reform would stablish an autonomous fiscal capacity of the European Union as indispensable contribution to the long-term sustainability of the new financial instruments currently under negotiation as well as to a qualitative and quantitative transformation of the European budget.

In an open letter to MEPs today, the European Federalists call on the European Parliament to propose the required amendment to the Treaties and ask the other EU institutions to commence the related process of treaty revision.

The rapid implementation of fiscal union is also the premise and the basis for the opening of the institutional work in view of the Conference on the future of Europe, that can then focus on achieving a true political union. The European Parliament has the democratic legitimacy and the institutional vocation to impose such an agenda on the Conference, and to elaborate and propose to the other European institutions and the Conference a project for a European Federal Constitution - similarly to what it did in the first legislature under the leadership of Altiero Spinelli.