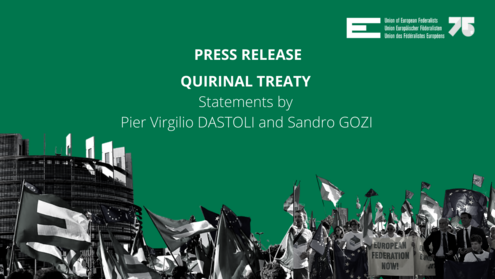 “The Quirinal Treaty between Italy and France will be signed in Rome on 25 November by Emmanuel MACRON and Mario DRAGHI.

The negotiations, launched in early 2018 by the Gentiloni government at a meeting chaired by Italian Minister GOZI and French Minister LOISEAU, and the drafting of the project had been entrusted to a group of six "wise men" including Italians Franco BASSANINI, Marco PIANTINI and Paola SEVERINO.

Among the priority themes of the agreement, emphasis is placed on research, culture, industry and defence, stressing the need to implement means such as structured enhanced cooperation in the event that unanimous decisions impede joint progress. After the Italian elections in 2018 and the formation of the Conte I government with Lega and Movimento 5 Stelle, the negotiations had been frozen, they were not resumed by the Conte II government due to the pandemic, and they were only relaunched by the Draghi government. They will finally be concluded on 25 November.

Many things have happened in the meantime in Europe and between Italy and France, including the start of the Conference on the Future of Europe, with the French and Italian willingness to consider the possibility of going beyond the Lisbon Treaty signed 14 years ago, at a time when the conditions of the world and of Europe were radically different from those of today.

This raises the question of "what to do" if some governments are not willing to negotiate and accept a revision of the Lisbon Treaty, and therefore which project, method and timetable to consider in order to overcome the obstacle of the Convention on the basis of Article 48 of the TFEU (Treaty on the Functioning of the European Union), which requires the convening of a diplomatic conference, the unanimous agreement of the national governments and the unanimity of national ratifications.

Within the platform on the future of Europe set up in September 2019 at the CNEL (National Counsil for Economic and Labour) by the Italian European Movement, the issue of differentiated integration has been discussed several times, a subject on which the Institute of International Affairs is working within the framework of a European project, while the European Movement has urged the Spinelli Group of the European Parliament to revive the essentially constituent method that the European Parliament had adopted for the elaboration of its draft constitution of 14 February 1984.

These are questions that the Quirinal Treaty should not escape, also in view of the conclusions of the Conference on the Future of Europe that could take place in May 2022 after the French presidential elections on 10 and 24 April 2022.

It should be recalled that the idea of a Quirinal Treaty was launched under the inspiration of the Elysée Treaty signed in the past between France and Germany and that a proposal has recently been put forward for a Franco-Italian-German initiative that would bring together the priorities of the two treaties after the formation of the new German government and in view of the conclusions of the Conference on the Future of Europe and the reopening of work on the reform of the European Union."

“We are on the eve of an important step that will give France and Italy a leading role in Europe and a new leading role in meeting global challenges. The signing of the Quirinal Treaty will ensure a solid and structured basis for making the relationship between our two countries work, creating a series of working groups and more fluid exchanges.

There is today a great political convergence between Rome and Paris on European and international priorities. In the context of such a favourable relationship as the one established between President DRAGHI and President Emmanuel MACRON, it is therefore important to seal this special relationship with a treaty whose signature will give more strength to Italy and France to engage in joint action at the European and global level. There may still be some differences of opinion or disputes, but we will now have a set of new diplomatic tools and political mechanisms to prevent and resolve them. If we European states compete with each other, we all lose. This is why it is essential that Italy and France work together, hand in hand, starting with the development of the Conference on the Future of Europe, which will have to be followed by important reforms of the European Union.”

These two statements, reproduced here with the consent of their authors, were originally written on 17 November 2021 for the members of the "Italian Platform for the Conference on the Future of Europe.

You can read here the French version

You can read here the Italian version