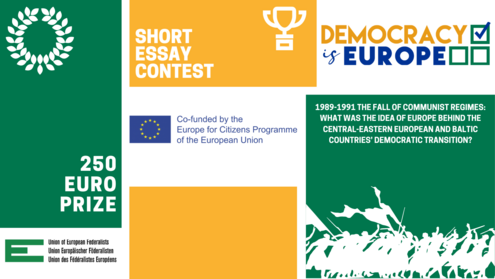 One year ago, the Union of European Federalists (UEF) embarked on our Democracy is Europe: Remember to Revive journey across the Baltics and Central and Eastern Europe. Two main ideas were behind this: on one hand, to raise awareness about the central role of European values in the revolutions of 1989-1991; on the other hand, to encourage a reflection on the future of Europe, European democracy and the Rule of Law.

As part of this project, UEF launched the “1989-1991: the fall of communist regimes: what was the idea of Europe behind the Central-Eastern European and Baltic countries’ democratic transition?” essay contest. Young people, aged from 18 to 25, were encouraged to express their thoughts on the peaceful revolutions and transitions that characterised these European areas. The driving idea of this contest was not only to promote the importance that European principles played back then, but also to explore what is their impact and state of play nowadays in those parts of Europe.

During the Democracy is Europe Final Conference on 2-3 December in Brussels, the essay contest results were announced.

You can read Mr Gustavo Álvarez’s essay below:

1989-1991 the fall of communist regimes: what was the idea of Europe behind the Central-Eastern European and Baltic countries’ democratic transition? by Gustavo Álvarez

Assuming a causal relation between Europe as a unified region and the revolutions and consequent democratic transitions in CEE and Baltic (CEEB) countries distorts the values and motivations behind these events. Framing conditions the comprehension of the argument. Therefore, it’s essential to draw the line between understanding CEEB democratic transitions through a pro-European collective ingenuity and a sociopolitical tool to avoid the return of the communist system. In the end, establishing a clear differentiation between these two perspectives aims to prove their correlation, but complementarity. It’s said, first we should acknowledge the values of the revolutions and democratic transitions in CEEB countries as a direct response in opposition to the communist regime. Only then, we could argue a shared set of ideas as the common denominator of Europe’s conception among the CEEB region.

In this case, before addressing the so-called “idea of Europe” we need to characterize how CEEB countries prevented themselves from a violent and illiterate Soviet revival. First, opposition intellectual movements appeared, inspired by political martyrs, such as Jan Palach, Romas Kalanta or Imre Nagy. These activist groups were known for their  underground organization and were publicly represented by one or two individuals. For instance, the Charter 77 with Václav Havel or the Helsinki Group with Larisa Bogoraz. The revolutions they organized were non-violent, individual freedom oriented and communicated through art. Some examples could be the Singing Revolution in Estonia, or the massive demonstrations during the Velvet Revolution. This innovative way of fighting against the communist establishment represented loyalty to the ideal of freedom, sacrifice for the people and union against the oppressor. These values were translated into peaceful and democratic transitions that helped to expel new communist aspirations and consolidate the germ for a liberal system all over the CEEB region.

The above mentioned values allowed the possibility for CEEB countries to develop a democratic political system and a free market economy. These values were precedent to any European aspiration, since they first needed to develop as a nation in order to enter the EU and NATO. It’s at this stage where the “idea of Europe” enters the liberal democratic transition among CEEB states. Since the emergence of the European Union, Europe has shifted its identity from a liberal democratic reference to a utilitarian body for agreed interdependency. In other words, CEEB countries implemented national policies based on EU “association agreements” during the 90s because of the economic, legal and geopolitical advantages of joining the EU (Sierp, 2015). Europe was the means for CEEB countries to consolidate parliamentary democracy and free market economy. Europe was not the goal because it was the catalyzer. It’s said, long-term democratic transitions in CEEB countries were based on the values they inherited from the revolutions and materialized by EU’s economic resources and political advocacy. In consequence, Europe has always been perceived as the necessary economic and political tool to achieve a proper democratic transition.

During democratic transitions, Europe was portrayed as valuable in itself, but merely useful for developing functioning liberal democracies among CEEB countries. Such conceptualization caused an indirect lack of unification between CEEB national revolution values (peace, freedom and intellect) and European democratic identity. Precisely, it’s this weak, might even nonexistent, ideological bond between Europe and CEEB states which enables anti-European narratives to strengthen. The moment economic or political instability appears, Euroscepticism spreads because Europe’s liberal idiosyncrasy was not embedded, along with economic and political support, during CEEB democratic transitions. For instance, the current democracy backsliding, due to massive support to populist and anti-European movements among CEEB countries, shows there is a high-percentage of the population, mainly in the CEE region, that don’t perceive Europe’s democratic values as their own. Ultimately, the absence of the abovementioned European-CEEB ideological connection raises ignorant societies, since citizens don’t understand that rejecting European institutions is highly counterproductive due to negative economic and political effects within their country.

Following the above mentioned arguments, Europe should acknowledge that, although CEEB countries are part of the EU, a democratic transition is not fully achieved until there is a crystallization of European liberal democratic values (Cianetti, Dawson, & Hanley, 2018). In simple terms, while there’s still European countries where the majority of citizens use their vote to empower leaders who depict Europe as the enemy, a stable long-term democratic transition it’s not completed. Europe has become an effective economic tool for market and political integration, while failing at being identified as the democratic ideal in CEEB countries. Accordingly, now more than ever, it’s essential to focus on the role of the EU as a liberal democratic safeguard in order to build a long-term ideological nexus with CEEB former revolution values.

The idea of Europe behind the Central-Eastern European and Baltic countries’ democratic transition was mainly utilitarian. The idea of Europe is still under construction. Democratic transitions in CEEB countries will only be fully successful if their population empathize with the idea of Europe as a liberal democratic safeguard, as much as they do with the values of their national revolutions. The role of the EU as an economic and political catalyzer for integration needs to be complemented by an ideological bond between European and national political values. As Václav Havel (2018, p. 92) asked: “Do not these ‘post-democratic’ relationships of immediate personal trust and the informal rights of individuals based on them come out of the background of all those commonly shared difficulties?” Let’s remember the past to revive our common objectives, remain unified under polarization, keep our intellect sharp and be loyal to the values that granted our freedom.

Read here the essays that ranked  second and third in our contest too:

We would like to take again the opportunity to sincerely thank all the young people that take their time and effort to contribute with their essays, as well as those who have supported our project.