Citizens representatives asked the Council to take their recommendations seriously and ensure a proper follow-up, including through treaty change.

On 2 December, half a year after the conclusion of the work of the Conference on the Future of Europe (CoFoE), the European Parliament in Brussels hosted the first follow-up event on this unprecedented democratic exercise.

The Union of the European Federalists takes stock of the open letter that the citizen representatives of the Conference sent to the European Commission and the Council and join in their concern.

In the document, the signatories express share a common worry with the UEF. They regret the “firm silence of the Council,” and its “unwillingness to listen to the citizens’ voice, and to pursue the change the EU needs.” The citizens hope for treaty change: they see it as a “necessity” if it is “the only way for implementing a proposal.”

Federalists, and with them all the supporters of the CoFoE, understand the necessity for Europe to adopt, without reserve, the recommendations put forward by the citizens that took part in the Conference–including the ones that require treaty reform.

Sandro Gozi, President of the UEF said: "we want a powerful and democratic Europe, through the strengthening of European parties and the Parliament. It is not enough that the member states decide by majority. The European Parliament must be able to supervise the work of the Council, have the right of legislative initiative and have more legitimacy thanks to transnational political movements and the introduction of transnational lists. These reforms should have started yesterday.”

The UEF will continue to support the claim of European citizens for a thorough implementation of the recommendations of the conclusion of the CoFoE and advocate for treaty reform, the only viable path towards a federal, sovereign and democratic Europe.

Here below the video of the intervention of our President, Sandro Gozi 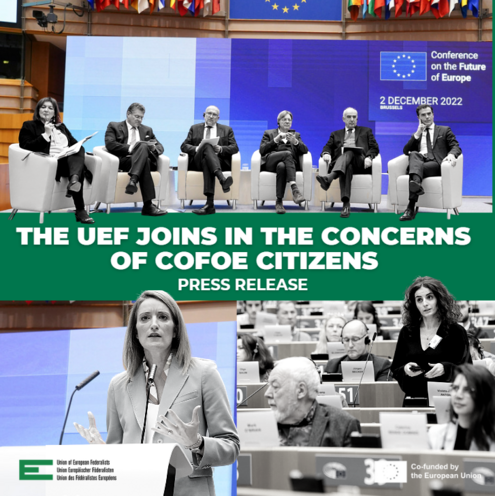