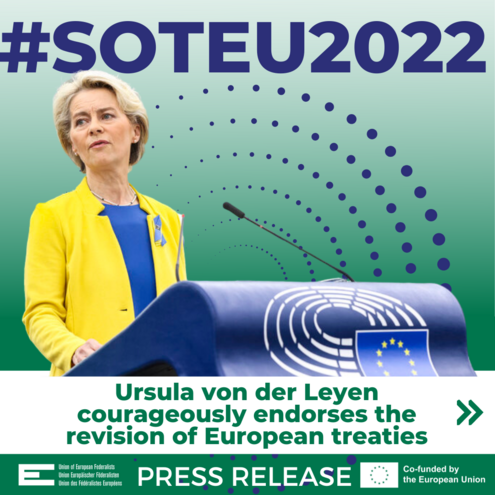 Although President von der Leyen rightly suggested enshrining generational solidarity in the founding texts of the Union, the European federalists would like to recall their proposals for a stronger and democratic Europe:

The reinforcement of the competencies and powers of the Union in areas such as health, energy and climate change, defense, and social and economic policies,

Shifting from the unanimity rule to qualified majority voting in all European policies, by extending the ordinary legislative procedure.

Sandro Gozi, President of the UEF said: "It was about time! Ursula von der Leyen proposed a Convention to reform the European Union as we federalists have demanded since 2019 and as proposed by the citizens in the Conference on the Future of Europe. Let's build a democratic and sovereign European power!”

The UEF stands with Mrs. von der Leyen when she calls for all Europeans to remain united in the face of hardship. Europe’s resolve will be put to the test in the weeks and months ahead, and the solidarity we show to each other must equal the one we must show to our friends in Ukraine.