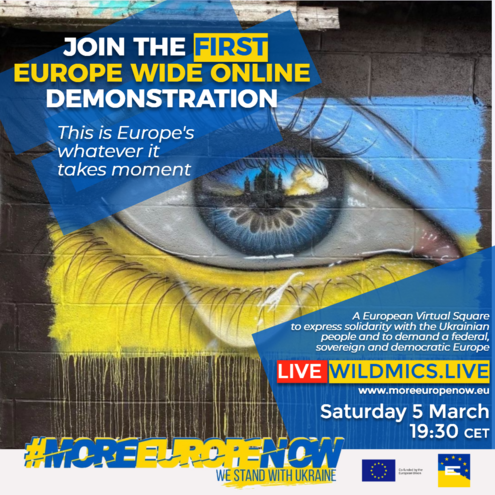 #moreEUROPEnow - We stand with Ukraine

We are delighted to invite you at #moreEUROPEnow, the first Europe wide online demonstration.

The Union of European Federalists has organised - in 48 hours - the first European online demonstration, together with other civil society organisations and citizens, to express solidarity with the Ukrainian people and call for a federal, sovereign and democratic Europe.

Invitees from all over Europe will each make a short political statement (in English) followed by moments of poetry and music.

Everyone has the opportunity to participate by writing phrases of support in the chat.

The event has a very innovative character because it will be broadcast on the Twitch platform - easy to access from both mobile phones and PCs without the need to install any software. Our event will be on the "Wildmics" channel, which already has a loyal audience of 30,000 users and has already organised similar events for a German audience.

This is an excellent opportunity to promote democratic values and a strong, united Europe in the light of the Conference on the Future of Europe.