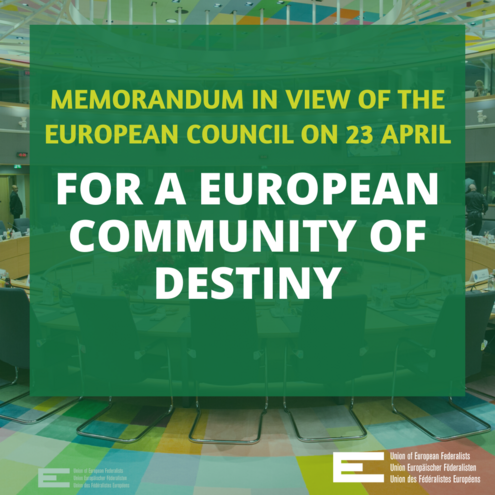 The size of the crisis triggered by the pandemic forces our country and Europe to rethink themselves in order to try to understand how to strengthen their political capacity so that it can be commensurate with the current challenge.

It will not only be the mourning, the many deaths and too much pain that will mark our public and private lives; nor will the problem be restricted to the economy, bent by exceptional circumstances, and to its social consequences. The very mentality of the Western world will have to change in order to confront the tragic aspect of history, which has once again become evident in all its harshness.

How the new Western vision of the future will be built is a game that will be played first and foremost in Europe. It is here that the start of a new, true supranational policy can be built, forging the alternative to the false answers offered by nationalism that would bring back the clock of history to the dynamics of totalitarianism in the 20th century. The political, social, cultural and moral values of our civilization are at stake.

Italy must face with this spirit and this sense of responsibility next European appointments and commitments, starting from the European Council of 23 April.

At the plenary session of the European Parliament on 16 April, President of the European Commission, Ursula von der Leyen, wanted to quote the Ventotene Manifesto to underline the exceptional nature of the moment and the ambition of the response that the European Union must be able to give. Altiero Spinelli and Ernesto Rossi are Italy's heritage, and that is also why it is up to Italy, if it so wishes, to indicate how to turn the words of the Manifesto into concrete actions.

The European Union in these weeks is discussing – and finding – immediate and exceptional responses to support the Member States facing the health, economic and social emergency. The European Council, on 23 April, will have to finalise the package of measures and instruments agreed by the Eurogroup for this purpose, and Italy must be aware that it has achieved a great victory, pushing the EU to change its mentality and approach, in particular with regard to the European Stability Mechanism.

Within this framework, the debate on the Recovery Fund, on which the European Council must agree to make it operational as early as the next few months, must distinguish between the need for its launch as an emergency instrument to provide immediate liquidity to States, and its development as the backbone of the European reconstruction strategy, which is intertwined with the launch of the European Green Deal.

Emergency can be tackled by simply making the best use of the possibilities offered by existing instruments. Reconstruction, conversely, requires the boldness of innovation.

A major European reconstruction plan that also responds to the need to affirm a revolutionary new economic model, strong in technologically advanced and ecologically innovative sectors, cannot be achieved with the instruments provided for today by the Treaties. It requires:

–    a new capacity for European political action, no longer limited to the coordination of national policies, but based on the principle of subsidiarity, to be able to act directly at supranational level where political action needs this dimension;

–    substantial resources and a new approach.

In this sense, while we welcome the proposals for a substantial increase in the ceiling and resources to be allocated to the new Multiannual Financial Framework, we cannot fail to note the limits of this approach, which ultimately leaves national budgets and parliaments, together with governments, responsible for collecting resources and implementing policies. Not only is the decision-making system cumbersome and bent on the need to always find a compromise between the different demands and visions of the Member States; not only is EU action itself severely limited; but above all, ambitions are diminished by this approach, starting from the inadequacy of the resources that (with such difficulty) can be allocated to the European budget, even if it will be doubled.

The need, in this new phase, to think as well about the creation of a common European debt clearly highlights the limits of the current system. We recall, among many on this point, the remarks by Lorenzo Bini Smaghi: "There are no European activities today nor European capacity to generate autonomous fiscal revenues that can be used to guarantee European public debt.... To issue Eurobonds, the EU must be able to generate new tax revenues... (i.e. have) a direct tax authority over the European economy and European citizens".

The Multiannual Financial Framework, with the current institutional limitations that determine its decision-making mechanisms, can never become an adequate European guarantee for a common debt; nor will it be able to give the European Parliament and the Commission the possibility to increase their revenues, indispensable in the face of the political ambitions that should be put in place. Nor will it ever be possible to go beyond the current governance model, which is based on the coordination of national policies and which does not provide for a European political level capable of acting autonomously and therefore effectively.

The size of the challenge we are facing today – if we really want to give an adequate common response, while at the same time creating the conditions to make Europe a leading player on the world stage in the coming decades – really forces us to return to the spirit of Ventotene evoked in Strasbourg by President von der Leyen, and “to think the unthinkable”, as French President Macron reminded us from the pages of the Financial Times: “Today is the moment of truth. We must decide whether the European Union is a political project or just a market”.

The real choice for Europe today, therefore, is whether to really become a community of destiny. It is a choice that involves the federal shift to a decisive point left unresolved for decades. Italy should propose that a targeted revision of the Treaties be immediately put in place in order to create fiscal competence at European level. Rally the other countries that share the ambition of a Europe capable of acting in the new world and seek the support of the Community institutions, starting from the European Parliament, which should feel called upon to take up the legacy of Altiero Spinelli.

If there were the political will, a few months would be enough to carry out the reform and get to the start of the new Financial Framework, having created the conditions for a federal budget line, fuelled by European taxes decided by the European Parliament instead of 27 divided Member States, which would represent the necessary basis for issuing debt with a federal guarantee. A revolution that would pave the way for a real constitutional transition, relaunching on a solid basis the process of confrontation on the future of Europe.

Italy has the interest and the vision to promote this change of pace. Only in this way can the sterile polemics be wiped out in one fell swoop and a new phase can be opened to give our country back the historical role it deserves.

Read the original version in Italian.