"To the Nordic countries who are still calling for temporary measures on flexibility, I say that the world they liked will no longer return. I think we should use the resources of the European Stability Mechanism without conditionality. And finally create Eurobonds. And we need the ECB to come up with an extraordinary 12-month anti-spread plan in which it commits itself to buying the bonds of countries with higher interest rates than German bunds. Otherwise we will find ourselves tomorrow that those who have invested more, have put their industry back on its feet; those who have indebted more, find themselves weaker."

Sandro Gozi, an Italian MEP but elected in France in the Macronian lists of 'La Republique en marche', speaks to us on the phone from France, where in the meantime the controversy over the leader of his party and president of the Republic Emmanuel Macron, accused of having acted late and with many mistakes against the coronavirus epidemic, is going crazy. "But all of Europe has acted late," says Gozi.

Let's start with the controversy about Macron. They accuse him of having acted late, of having wanted to maintain the first round of the municipal elections last Sunday, delaying the bans on the gathering, of having given the Parisians time to escape from the capital by announcing in the evening a French-style 'restateincasa' that would only be taken the following day at noon. Hard to defend...

The main reason for the attacks is the decision to hold the first round of the municipal elections. But there was no agreement between the parties on the postponement. Part of the opposition did not agree, the Republicans especially wanted to keep the date, the president of the Senate as well. What would have happened if, despite the negative opinion of the opposition, Macron had decided to postpone the electoral appointment? He'd be accused of the opposite: He doesn't respect democracy, he doesn't even let us vote...

But he acted late.

I think the whole EU was late. For at least a week now, they've had to turn the whole EU into a red zone. And instead they continue to accumulate delays and errors: re-establishing the borders between us risks blowing up the internal market. Instead, we must control external flows, as was decided yesterday.

Here, but Britain is not aligning itself with the decisions taken in Brussels and is leaving its borders open. While the British will be able to continue to come to the EU because, as von der Leyen said, they are still "European citizens", because the negotiations to define the Brexit have not even begun. It means that in theory a Briton can visit the other countries of the world, return to Britain and from there come to the continent, with all the risks that this entails in terms of spreading the pandemic.

Unfortunately, it is already happening: in the north of France, there are already many British people who have arrived these days because they are attracted by the French health system which is better than the British one. I think that if these differences with London continue to exist, it will be necessary to use all the public order and health clauses to close the border with Great Britain. I hope it will not come to that, but it will be necessary if there is no agreement with Johnson.

Europe is acting late. What are you of Renew Europe proposing?

A European research consortium: we must ensure collective security and the common good, namely vaccine research. Research laboratories and pharmaceutical companies must work together as a team to find the vaccine as quickly as possible. Von der Leyen says that we may have found the vaccine by the autumn. That's it, we must do it as soon as possible: speed up.

There are still European countries nostalgic for an old world that will never return. I say to the Nordic people: there is no point in them calling for temporary measures any more. This pandemic brings with it devastating effects like a real war. I understand that there are people who have been negotiating Stability and Growth Pact, 'Six and two pact', for years, and now they are struggling to leave their world made up of these rules. But we have already entered a new world.

We need a massive investment plan, both at national and European level. The Commission and also Parliament should focus on green investment, green deals and health. And then: since we have resources from the European Stability Mechanism, we must use them without conditionality. That is to say, without having to sign a memorandum of draconian cuts. The ESM conditionality is decided by the ESM itself. That is why it would be appropriate to take action without conditions or troikas. I don't understand why populists are shooting at a mechanism that's ready for emergencies. On top of that, Eurobonds must be created.

What can the ECB do? Lagarde has so far messed up with his statements that have caused the spread to widen and the markets to collapse.

In addition to buying government bonds (QE) and bank financing (ltro) and interest rates, the ECB can buy both EIB and ESM bonds. The ECB needs to make an extraordinary intervention. All countries will make massive investment plans. But this must not lead to further imbalance between North and South, i.e. between those who can afford to spend and those who will do so by getting into debt. We therefore need a 12-month ECB plan in which the Central Bank undertakes to buy the securities of countries with higher interest rates than the German bunds. That is to say, an 'anti spread' plan, otherwise tomorrow we will find that those who have invested more, have put their industry back on its feet; those who have indebted more, find themselves weaker.

This is the toughest test for the Union.

We must move towards a federal Europe. The conference on the future of the Union must stipulate that coordination between governments is not working and must move towards a federal Europe. If this is not acknowledged, it is clear that this crisis will be the last act for the EU. We must have a sense of urgency, not only to save lives but also because we have entered a new world and the rules that existed until now are completely outdated. Beautiful cohesion, patriotic and national feeling, but if we do not build a real transnational policy, we will all lose the battle. 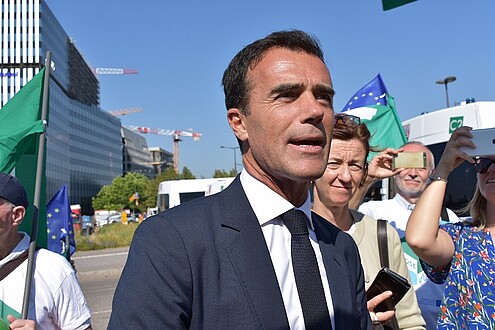