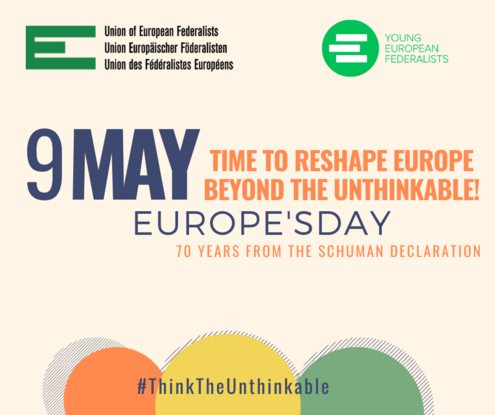 The 9th May 2020 is the 70th anniversary of the Schuman Declaration, a moment that marked the beginning of European integration spiritually and politically. On 9 May 1950, by proposing to pool the production of coal and steel among European countries, Schuman took the bold and courageous step to propose the ‘first concrete foundation of a European federation indispensable to the preservation of peace’. Today Europe needs the same type of leadership, courage and political innovation “Do our present European leaders remember the deep roots of the European project, when every European Summit is a bitter pursuit of short-term, selfish national  interest?”, asks Sandro Gozi, President of the Union of European Federalists. "Can they raise above their daily political concerns, break taboos, transform European politics and come up with a radical and far-sighted plan for the future of the EU? What is at stake today is no less than the future of Europe as a political project”

The Union of European Federalists and the Young European Federalists have launched today an appeal and an orientation paper to European decision-makers, at all levels of government, for 10 concrete steps - in the short- and medium-term - for exiting the COVID-19 crisis as a united and prosperous Europe. The appeal and the orientation paper propose a range of measures: from providing a European guarantee for basic public health standards; to restoring the full functioning of the Single Market and the Schengen area, and adopt an ambitious long-term EU budget, to engineer Europe’s recovery through real European resources and on a socially and environmentally sustainable path; as well as the need to relaunch the Conference on the Future of Europe, the instrument to establish a new pact between European citizens and governments at all levels, through a mandate for a European Constitution.

“The vision of the Founding Fathers and Mothers of the EU seems to have been lost, crisis after crisis.  Sometimes, the attempts at wearing it down have come from geopolitical competitors, who loathe the EU model based on democracy and the rule of law. Sometimes, like in the case of the COVID-19 outbreak, we are blindsided by a health crisis we couldn’t predict, but that we could have prevented, if we had shown more care to our environment. And yet the more it’s hit, the more Europe shows its strength. But as it was once said, ‘peace cannot be safeguarded without the making of creative efforts proportionate to the dangers which threaten it’. Today, that creative effort requires the caterpillar that the EU is today to break free from the chrysalis of intergovernmentalism, and evolve into a real political union, a butterfly able to fly without shackles”, concludes Leonie Martin, President of the Young European Federalists.