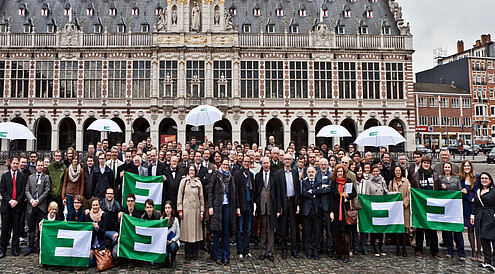 - concerned about the persistent financial and economic crisis, and deploring the lateness and inadequacy of the measures adopted by the national and European governments;
- convinced that the debt reduction and greater budgetary discipline, although necessary, are not sufficient to guarantee a way out of the crisis;
- certain that, with an integrated European economy and a single currency, the national economic policies are totally inadequate to stimulate growth and protect future generations;
- aware that, in the absence of suitable European initiatives for development, the economic recession is bound to deepen, making the condition of the most indebted countries untenable, eroding incomes, and leading to mass unemployment and a breakdown of social cohesion;
- conscious that the crisis is not only economic, but also political and institutional, and that it cannot be tackled through intergovernmental solutions alone;

- the implementation of an environmentally and socially sustainable European development plan, in order to promote investments in infrastructures, environment and social-friendly transformation of the economic model, greater use of renewable energy sources, research and innovation; the plan will be funded by own resources and by strongly increasing the European budget through the introduction of European taxes (such as the one on financial transactions and the one on CO2 emissions, which, will partially replace national taxes and will allow a more balanced distribution of the tax burden between different levels of government, local, regional, national and European) and the issuing of Euro-project bonds;

- the drawing up, before the 2014 European elections, of a plan to relaunch the European constituent project, so as to resolve, without delay, the crucial problems of the democratic legitimacy of the European Union and of the government of fiscal, budgetary and monetary policies, so that the European institutions might win back the consent of the European citizens and of the international community.

-      the current petition to the European Parliament on fiscal union launched by the Presidents of the UEF, JEF and European Movement International;
-    the dissemination, in Europe, of this and other initiatives and demands put forward by organisations, personalities, and movements that support the European political union on a federal basis, along the lines of the battle that JEF and UEF, through its national, regional and local organisations, has been waging for years.

-    to set up a task force which will be specifically required to establish contacts with the above-mentioned organisations, personalities, and movements in order to organise a European Coalition for a Federal Union Now. The priority should be the coordination of the various initiatives to mobilise public opinion, to put pressure on the European and national institutions, on the governments and on the political parties, and to highlight the need to solve, at European level, the problems created by the crisis, to promote a European New Deal, and to tackle the problem of the absence, at European level, of true democratic legitimacy and capacity for democratic government.
-    looks forward to organising in the autumn of 2013 a large congress of Europe's federalist forces which will launch the European Parliamentary election campaign.