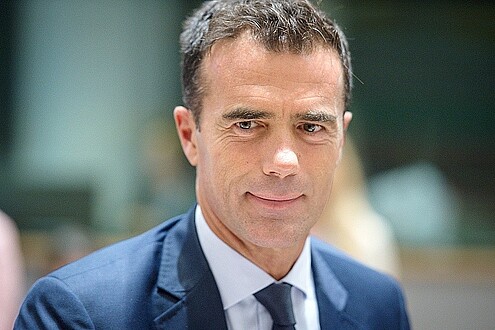 Ahead of the fourth summit dedicated to the response to the coronavirus pandemic, Sandro Gozi insists on the need to "renew the European project".

What do you expect from this meeting of Heads of State and Government?

I would like the Heads of State and Government to immediately announce a recovery fund of at least EUR 1000 billion, so that tomorrow's world begins today! But I am afraid that the reality is quite different and that the debates will continue for a while.

Can the Dutch and Italians, whose points of view are on the opposite, come closer together?

Yes, I think so. But both Rome and The Hague are still prisoners of the past ideological debates, namely the mutualisation of the debt for the Netherlands and the activation of the European Stability Mechanism (ESM) for Italy, even though this time there is no question of austerity... The whole issue is to push each other to free themselves from these outdated shackles.

Could this crisis reconcile politics and the economy?

This crisis must put the economy at the service of recovery and reaffirm the primacy of politics. During the financial crisis, the economy had the priority. This time, the need to renew the European project and move towards a sovereign Europe must have the priority over economic obstacles.

What weakness does this crisis highlight in Europe?

It has highlighted the fact that Europe was conceived as an association of States thought only from the point of view of utility. Today, we must move towards a Europe thought as a community of peoples in solidarity. If Europe's response is up to the task, we will be able to create what has always been lacking: an emotional bond between Europeans and Europe.

Will the European project be stronger or weaker?

It will depend on the courage of the EU. Ursula von der Leyen has said that we must live up to Altiero Spinelli. However, I did not see federalist actions by the Commission’s President. A "new" Europe is necessary, but its realisation will depend on its ability to resist the temptation of business as usual. Confronting the coronavirus and the future, Europe must avoid minimalist solutions.

The European Union has been slow to respond to the crisis. Will it do better for recovery?

That is the whole question. I distinguish three phases in Europe's response. The first - catastrophic - during which the crisis was underestimated. The second, when measures unthinkable before - the flexibilization of State aid or the suspension of the Stability and Growth Pact - were taken. We are entering the third phase of reconstruction with many questions: will the leaders take the measure of the emergency? This is not the time to make cheap compromises. We need tough political confrontations in order to take ambitious decisions.

Do you think this crisis will restore Europe's health sovereignty?

Europe is dependent on China. French, German, and Italian companies have relocated their production - especially of medicines - to China. Europe must therefore recover its industrial sovereignty, and this will not go without rethinking its economic model.

Will the crisis overshadow the EU's goal of carbon neutrality?

In the immediate term, the urgency is to intervene in all sectors to prevent company closings, increased unemployment, and poverty. But then, the recovery must follow a sustainable path and be based on the "green pact" put on the table by the European Commission last December.

There are calls for the conference on the Future of Europe to start as soon as possible. Is this the priority?

It must start after the summer! In order to project ourselves into the world of tomorrow, we need to start an in-depth reform of the EU. This must be the object of this exercise, which is even more justified from the moment that we must rethink the way we live together.

Has the relationship between citizens and Europe been changed by this unprecedented crisis?

Initially, a feeling of rage and disenchantment prevailed. Because of its initial mistakes, the EU started the marathon late, when its competitors had already covered 10 kilometres. As a marathon runner, I know that if we go fast and are efficient, we can win back hearts, not only in Italy but also in France. Of course, there is a risk that most citizens will turn their backs on Europe, but if Europe succeeds in its post-crisis revival, an unprecedented feeling of belonging could prevail.