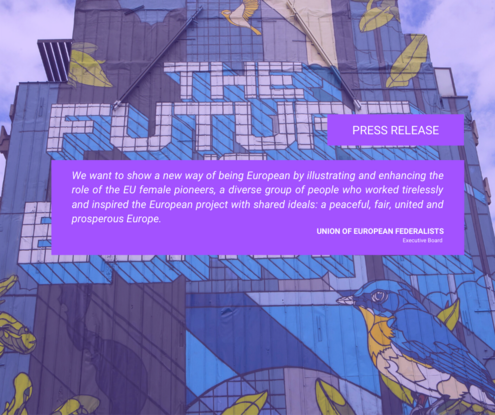 Gender equality is a core principle of the European Union; a lot has been done to put it in practice but we are certainly not there yet. In business, politics and society as a whole, the Union must eliminate inequalities and to promote equality. This year’s theme for International Women’s Day, "Founding Mothers of Europe", commemorates all the visionary female leaders who inspired the creation of the European Union.

On this day, we want to show a new way of being European by illustrating and enhancing the role of the EU female pioneers, a diverse group of people who worked tirelessly and inspired the European project with shared ideals: a peaceful, fair, united and prosperous Europe.

Today, we commemorate figures such as Louise Weiss, the journalist who fought tenaciously for women's right to vote, the reconciliation and disarmament of Germany and France and whose ideas contributed to the construction of Europe. Simon Veil, the first president of the European Parliament (1979-1982) who developed the institution’s external relations by taking positions on major international issues, and even by engaging with third countries. Or Ursula Hirschmann, who organised the first meeting of the European Federalist Movement and "Femmes pour l'Europe'' believing that the European project needed a wider participation of women to achieve a true democracy in Europe.

Women and men are not equally represented across the European institutions and national governments. Women are most often in charge of ministries, delegations and permanent or parliamentary committees relating to social, educational, cultural, or rights-related matters, but are rare in the prestigious and regalian domains of economic affairs, foreign affairs and defence. Ursula von der Leyen, first female president of the European Commission is still an exception.

Significant strides in policies and programs cemented our dedication to improving the status of women and girls worldwide, and we must uphold our commitment to protect their rights. We need to keep addressing gender-based violence, gender stereotypes, gender gaps in the labour market, give equal participation across different sectors of the economy and achieving gender balance in decision-making using different tools like the EU Action Plan 2020-2025.

We appeal to all Member States to turn the current momentum into action, also using the opportunity of the resources of Next Generation EU to invest in reforms that make women's empowerment in our society truly possible. We can achieve sustainable development only by continuing to place gender equality and women's empowerment at the heart of our work and the EU economy. We want to encourage a new way of conceiving Europe by recounting these women’s lives and by looking for the soul and the sense of responsibility that Europe seems to have lost.

News from our sections on International Women's Day

Our newborn section of UEF Greec organised interviews with the main Greek women Politicians from different political families (Former Ministers and MEP Marietta Giannakou , Anna Diamantopoulou, Louka Katseli and Professor of Medecine Xara Spyliopoulou). It was a unique event. During the 4 hours long online event the main topics addressed were:  “Mothers of Europe”, “Conference on the Future of Europe” and the role of federalists as well as other key issues for the post COVID-19 period.