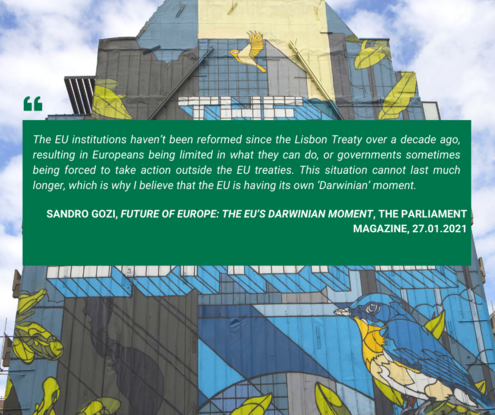 Despite the widespread conception of Darwinism as the survival of the fittest, the famous English naturalist’s message was actually very different, if not the opposite. In nature, only those species that adapt can survive. It is the same with institutions: they either adapt or become irrelevant.

The EU institutions haven’t been reformed since the Lisbon Treaty over a decade ago, resulting in Europeans being limited in what they can do, or governments sometimes being forced to take action outside the EU treaties. This situation cannot last much longer, which is why I believe that the EU is having its own ‘Darwinian’ moment.

Since failing to ratify the Treaty establishing a Constitution for Europe, the EU has been living through an existential crisis, one where each additional crisis - the financial crash of 2008, the migration crisis of 2014 and the Brexit referendum in 2016 – has further limited the construction of a stronger Europe. Instead, we have seen the advance of intergovernmentalism and the chronic inability to develop a common foreign policy capable of promoting our common strategic interests.

Then, the COVID-19 pandemic reached our borders and spread across our societies. Faced with the collapse of our economies and an unprecedented health challenge, Europe stood united, showing a new resolve to react and adapt. In July, the 27 Member States reached a historic agreement: a €750bn plan to kickstart the Union’s recovery.

The recovery plan would be financed by shared borrowing and repaid by new EU own resources: a first step towards the creation of a federal Union capable of asserting European sovereignty both domestically and abroad. This unity persisted when Poland and Hungary attempted to block the adoption of the Multiannual Financial Framework and the recovery plan, over fears that EU funds could be linked to respecting the Rule of Law.

Our union is, above all, one built on common values and fundamental freedoms. The management of the Coronavirus crisis at EU level has shown the way forward for the future of European integration. As European citizens, we need a strong Union, capable of acting rapidly on a wide array of policy areas, ranging from health and fiscal policy to defence and taxation.

A new human security strategy, that protects human rights and fundamental freedoms needs to be placed at the centre of Europe’s transformation into a truly transnational political space. Within this new context, the Union must pursue - with strength - its digital and ecological transitions. The EU should also strengthen its role on the global scene. It needs to redress strategic imbalances in the Mediterranean and the Middle East, formulate a strategy against foreign interference in our democratic processes and create a more humane migration policy.

It should also renew the Transatlantic Alliance, based on European strategic autonomy and look to restore multilateralism in the international arena. However, the affirmation of a powerful Europe will require the creation of a genuine political Union, fully democratic, with the establishment of a genuine transnational polity. In order to survive in an increasingly unpredictable world, we need a stronger Union to ‘take back control’ of those transnational issues where national governments have lost control and become powerless.

This requires a rethink and change of Europe’s relation with power: a very difficult but necessary debate as the Union was conceived after World War II as a counterpoint to national powers. Nowadays, what we need is a powerful Europe capable of facing challenges such as new security threats, foreign interference in our democratic process and unfair global industry competition. The new political Union must go beyond the classic pattern of association between States.

“L’union fait la force” (Unity makes strength) is not enough: we must work for a more legitimate EU conceived as a ‘community of solidarity’. The EU should become a new transnational entity, where the notions of sovereignty and power are no longer based on Westphalian, nation-state-centred, conceptions. Instead, it should be built on a spirit of solidarity between European people and where a new dimension of direct and participatory democracy is developed, as a complement to, and in synergy with, representative democracy.

That is why the Portuguese Presidency of the Council needs to start the Conference on the Future of Europe now. Crucially, the Conference will be the best way to bring together citizens, civil society representatives, NGOs, trade unions, representatives of national and European institutions, to build a new political union that is more effective and legitimate than ever before.

This article, Future of Europe: The EU’s Darwinian moment was published on January 27, 2021 on "The Parliament Magazine" and written by Sandro Gozi.

The original article can be found at https://www.theparliamentmagazine.eu/news/article/europes-darwinian-moment