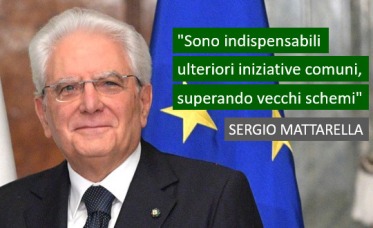 The exceptional circumstances that Europe is going through require rapid, effective but also forward-looking responses proportionate to the dangers that threaten us: not only the pandemic, but also the return of nationalism. If we cannot defeat both these dangers, the European project will be lost.

Despite the efforts of the European Union institutions - which have put in place exceptional measures and substantial resources, and are preparing other important initiatives - the events of the past few days show that the European Union is still held in a weak position by the Member States, which keep the monopoly on political decisions in their hands. This is why the EU does not have the instruments to give a unified response in the health emergency and does not have the indispensable instruments of solidarity between citizens that characterise every real political community. This is how the virus of nationalism spreads.

This weakness can be lethal. It can only be overcome by putting the federal project back at the centre of the debate, recognising that Europe is a community of destiny. The solution is to overturn the relationship between the Member States and the Union, taking away from the former the monopoly on political action, first and foremost in the sphere of solidarity; and giving the European Union the task and instruments to act directly, including in this field.

Today, Europe needs to deploy all its resources to provide a common response to the crisis by launching a major European recovery plan. With this in mind, the question of launching common debt issuance (Eurobonds) as soon as possible becomes impossible to avoid. There is, however, no European institution capable of fully guaranteeing such issuance. Today, the common debt could only ultimately be guaranteed by national budgets. That is also why, within the Union, talking about European debt provokes conflicting reactions; that is why we cannot talk about solidarity between citizens, but only between states.

In order to create the solidarity between citizens that is needed to meet common challenges, it is then necessary to address the problem of a European federal fiscal power. That is to say, we need to create an autonomous EU fiscal capacity which can be enforced directly (without the mediation of the Member States) on the European economy and European citizens, to feed a federal budget and provide European public goods. Obviously, this implies raising the issue of a revision of the Treaties, as this would be a question of giving the European Union fiscal competence. The European Parliament, with the Commission, should be given the power to decide autonomously how to raise own resources and also to manage European debt issuance autonomously, offering a European guarantee to free themselves from national budgets.

Fiscal competence should also go hand in hand with the extension of competences and the allocation of new, exclusive or shared competences in areas and policies that require a European framework (respecting the correct application of the subsidiarity principle), such as certain aspects of health and welfare policies, or industrial policy, research and innovation, immigration and the environment, together with defence. In this way, the European Union would effectively become capable of putting in place a major recovery plan by reinforcing those policy areas that cannot be fully developed at national level alone and would thus provide concrete responses to citizens' needs and expectations.

Including in the current debate the relaunch of the European unification process, with a clear and concrete federalist proposal aimed at providing structural responses to the problem that seems most urgent at the moment, is also an indispensable contribution to support and guide the negotiations on the Multiannual Financial Framework, in which we see too often the wall against wall of national governments because the proposals are weighed on the basis not of collective benefit, but of the cost to their own country. Instead, the negotiations must be relaunched with urgency and ambition, in order to increase their capacity even beyond the 1.3% requested by the European Parliament, exploiting all possible options under existing treaties.

In addition, open the process to create a first nucleus of federal political power, already while the emergency is being tackled, is also the only possibility to resume as soon as possible the path outlined by the Conference on the future of Europe, and to transform it into a real constituent process leading to a federal constitutional pact.

We therefore appeal to all democratic forces convinced that there is no future for any Member State outside the European Union; to the leaders of governments who are trying to find the best means of acting together as Europeans, at this dramatic time; to the European Parliament, as the only institution directly elected by the citizens of Europe, and to every MEP, to support this proposal, the only one that can give the European Union the basis for a stronger start after this crisis.

As the President of the Italian Republic Mattarella said, "Further joint initiatives are essential, overcoming old patterns that are now outside the reality of the dramatic conditions in which our continent finds itself". The future of the very idea of Europe is at stake. The next choices will irreversibly determine our destiny. Today, or never, is the time to resume the path indicated by the Founding Fathers to make all citizens feel that we are a community of destiny.

Statement by the National Board of the Movimento Federalista Europeo (UEF section in Italy): read the original version in Italian.