HomeUEFPoliciesConference on the Future of EuropeSpinelli GroupActivitiesPublicationsMembersNewsJoin UsSearch
UEF, Featured, Conference on the Future of Europe, Events, 25/05/2020
RECOVERY FUND SHOULD PAVE THE WAY TO A FISCAL UNION, FUNDAMENTAL STEP TOWARDS A POLITICAL UNION
UEF, Featured, Events, 19/05/2020
S. Gozi: A Fund to Transform the Union and bet on a common future
Featured, Events, 18/05/2020
PLUX ONLINE
UEF, Press Release, Featured, Events, 12/05/2020
70 years from the Schuman Declaration, relaunch the project of a federal Europe
UEF, Featured, Events, 09/05/2020
9th of May - Virtual Europe's Day
On the occasion of the opening plenary session of the European Parliament in Strasbourg (2 July 2019), the Union of European Federalists (UEF) and the Young European Federalists (JEF) are organising a public debate with 20+ federalist-minded members of the European Parliament and a public action to kick off federalists engagement with the new Parliament. 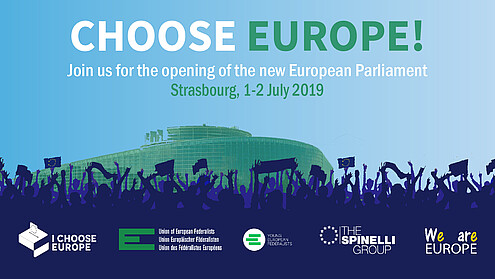 The public debate "A new Parliament for new Europe": Federalists meet new MEPs (19.00, European Parliamentary Association) will give activists from civil society organisations and EU citizens the chance to discuss with the most federalist-minded of the newly elected MEPs on their priorities for the new term of the European Parliament and the perspectives of action towards a federal Europe.

Tomorrow morning (2 July) we are calling pro-EU citizens to voice their demands to the new MEPs in a rally in front of the European Parliament before its opening plenary session (8.00-10.00).

Here more information on these events

The Union of European Federalists (UEF) is a pan-European, non-governmental political organisation dedicated to the promotion of European political unity. For more than 70 years UEF has been a leading voice in the promotion of European unity and an early campaigner for key milestones in the development of the European Communities and then the European Union. With 25 national sections and over 400 local groups across Europe, UEF promotes a federal Europe among citizens and political representatives at all levels of government.
More on: www.federalists.eu

The Young European Federalists (JEF-Europe) is a non-partisan youth NGO with 13.000 members active in more than 30 countries. The organisation strives towards a federal Europe based on the principles of democracy and subsidiarity as well as respect for human rights. JEF promotes true European Citizenship, and works towards more active participation of young people in democratic life.
More on: www.jef.eu

The Spinelli Group is an initiative launched in September 2010, led by Guy Verhofstadt, Daniel Cohn-Bendit, Sylvie Goulard and Isabelle Durant, followed by Andrew Duff and Jo Leinen as co-chairmen of the MEP-Spinelli Group. The aim of the Spinelli Group is to become a network of citizens, politicians, academics and writers who are convinced it is time for Europe to move forward. www.spinelligroup.eu