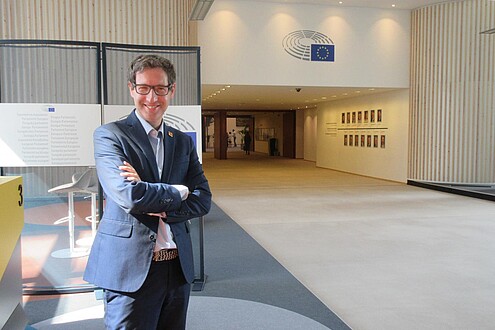 The global public health crisis that we are experiencing due to the threat of COVID-19 has been shown in all its severity as the greatest threat to Europe since the Second World War, just 70 years after the Schuman Declaration. Our way of life, our sense of peace and security as advanced and welfare societies is being put at risk by the uncertainty that the virus is causing at the health level and by the consequent economic standstill and increase in unemployment. As in 1950, our ambition must be equal to the challenges (and threats) of the present time.

Once again, as happened in the great financial and economic crisis that began in the summer of 2007, it is clear that nation states alone are not a sufficient governance dimension to face a challenge of these proportions.

In this context, the Commission and the European Parliament have not (entirely) stopped, while the Council has been hindered by the division between countries that are more fiscally sound (and less affected by the virus) and the others. On 26 March 2020 the plenary of the European Parliament met, for the first time in its history without the physical presence of most of the MEPs, to approve the first measures presented by the European Commission to tackle this crisis. Three issues in particular were on the agenda and received an overwhelming majority for their implementation.

The regulation on the allocation of slots at EU airports was amended. This measure seeks greater flexibility in the obligations of airlines in the use of slots at airports. This measure will temporarily prevent ghost flights by avoiding a major impact on the aviation sector which is being hit hard by this crisis.

A regulation was approved to support Member States and citizens in the fight against the coronavirus. Thanks to this measure, 37 billion euros will be made available from Community funds to combat the consequences of the pandemic and to provide health systems, job markets and small and medium-sized enterprises with more and better resources.

Finally, Parliament approved a modification of the European Union Solidarity Fund to include in its scope of action, apart from natural disasters such as earthquakes or floods, risks and emergencies linked to public health, putting at the moment 800 million euros in this year 2020 to support health care.

The Commission has also set up a central purchasing office for healthcare equipment, applied the flexibility in the Stability and Growth Pact, and authorised state aid to companies. These measures are certainly to be welcomed, and therefore supported. Many more resources are needed, however, to compensate for the brutal fall in income and revenue that businesses and workers, including the self-employed, have to face, with the consequent increase in the debt of the States.

The Group of the Party of European Socialists and Democrats in the European Parliament is preparing a common political position that will provide the necessary European and social response to this crisis, and which already includes the issue of Community public debt, backed by the Community budget, which will make it possible to finance a large-scale European investment plan.

The European Commission is proposing a system of loans to finance temporary redundancy programmes, the capital of which would be raised through an issue of European public debt, backed by national guarantees. This would make it possible to obtain some 100 billion euros, but no more, given the limit imposed by the current Multiannual Financial Framework (MFF), when we need no less than one trillion. It must also be possible to attract funding from the European Stability Mechanism without conditionality. But the MEDE can now provide some EUR 400 billion.

It is therefore necessary, in the short term, to set up an Economic Recovery Fund outside the (temporary) Community budget but managed by the Commission, which will make it possible to mobilise debt of the order of magnitude mentioned above, backed by new own resources, such as the border C02 tax, the tax on financial transactions, the tax on plastic, the digital tax, a fraction of the common consolidated corporate tax base, and the profits of the European Central Bank.

Over the medium term, the expenditure ceiling of the MFF needs to be raised considerably, especially taking into account the arithmetical effect of the fall in nominal GDP in this year and next (at least), so that sufficient EU debt issuance can be counted. For the time being, the 1.3 proposed by Parliament will fall short of this. The Commission should rapidly propose a new MFF with a significantly higher threshold than the current 1.1 per cent. On the other hand, debt, as it provides the Union with financial means, should also be officially included in the list of own resources.

Finally, the capital of the European Investment Bank should be increased, and it should be proposed that the European Central Bank transfer money directly not only to the banks, but also to households in the Eurozone, to ensure that no person is left without support, and to relaunch consumption when confinement is over.

At the plenary session on 16 and 17 April 2020, the European Parliament will vote on a comprehensive resolution on the response to the coronavirus in which pro-European and socialist approaches must be strengthened. From the health point of view, it is necessary to take advantage of the tools already available in the Treaties, such as Article 168.5 of the TFEU, which provides for Parliament and the Council, through the ordinary legislative procedure, to adopt rules to adopt support measures against pests and health threats affecting several Member States.

In a question submitted to the European Commission on 3 April 2020, I, together with César Luena and Javi López, called on the Commission to act in accordance with this article, as it provides a legal basis for launching the European Health Union, thereby improving coordination between the various European health systems and the necessary investment in health equipment. But this is only the beginning. It is clear that public health must be a shared competence between the Union and the Member States. The Union must have the power to impose, in a harmonised manner, hygiene, health and social distancing measures in the event of pandemics, such as those adopted by certain Member States in a unilateral and uncoordinated manner. In this context, it is also necessary to postpone the United Kingdom's departure from the European Union, extending the transition period until 2022.

However, it is necessary to go beyond the health and economic emergency, to include the necessary institutional reforms. This includes a reform of the Treaties that contemplates the constitutionalization of the Social Pillar (to which the Health Union is a party), the Green Pact (fundamental for restoring the environment, which also causes the appearance of new viruses), the establishment of some own resources, and the completion of the euro, together with the end of the paralyzing unanimity in the Council (lethal in emergencies such as the current one: e.g., the failed European Council of February 26, 2020), and the extension of co-decision with the Parliament.

All our energies as representatives of European citizens must be focused on supporting emergency measures and on solidarity with our fellow citizens who are suffering and facing the coronavirus. At the same time, it is imperative to turn this crisis into an opportunity to relaunch Europe's political integration, so that we can become stronger in the future in the face of all kinds of threats to our security, including those of a public health nature, but also those of a geopolitical nature.

On 9 May 2020, an Interinstitutional Declaration must be signed by Parliament, the Commission and the Council, launching the Conference on the Future of Europe, which must serve as a catalyst for the Convention and the Intergovernmental Conference. The final result cannot be anything other than a new federal constitutional pact.