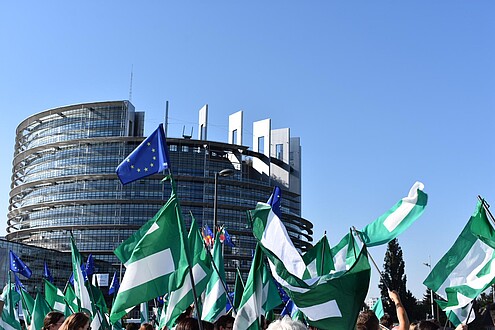 Sandro GOZI, President of the Union of European Federalists (UEF), declared that “today, simply celebrating the EU and its achievements is not enough. Europe needs change, and the newly elected European Parliament must be the leading force of such change. A reform of the EU treaties towards a stronger, more democratic, more social, more effective, sovereign, federal Europe is needed to bring European solutions to common European challenges such as climate change or migrations and make Europe count in a world more and more dominated by clashes among continental powers”

The Young European Federalists (JEF-Europe) is a non-partisan youth NGO with 13.000 members active in more than 30 countries. The organisation strives towards a federal Europe based on the principles of democracy and subsidiarity as well as respect for human rights. JEF promotes true European Citizenship, and works towards more active participation of young people in democratic life.More on: www.jef.eu

The Spinelli Group is an initiative launched in September 2010, led by Guy Verhofstadt, Daniel Cohn-Bendit, Sylvie Goulard and Isabelle Durant, followed by Andrew Duff and Jo Leinen as co-chairmen of the MEP-Spinelli Group. The aim of the Spinelli Group is to become a network of citizens, politicians, academics and writers who are convinced it is time for Europe to move forward. More on: www.spinelligroup.eu