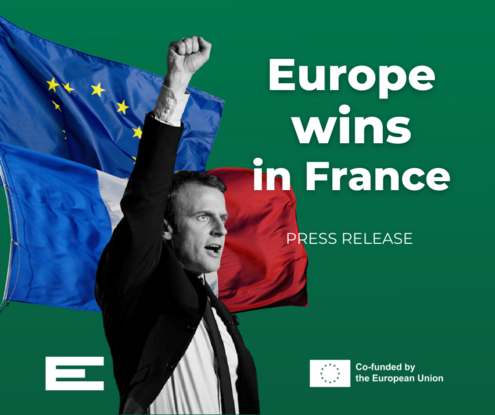 The whole European Union had its eyes on France these days. It would have been unthinkable if the run-off election in its Member State, one of the six founding members, had not gone in favor of Emmanuel Macron. It would have been a political earthquake not only in France but in the entire EU. In his first term in office, President Emmanuel Macron has succeeded in making France once again an "engine with high horsepower “in view of the European integration. He gave new political impetus to the European project, which had fallen into the status quo as a result of the many crises of the last decade. Needless to remind that it was Macron who first called for the Conference on the Future of Europe (CoFoE); it is also due to him that today we are again talking about a common European defence.

"Many times – too many times – Europe has been at a crossroads. The European Union needs France as a strong Member State, especially because democracies in some; Member States are currently under pressure. Likewise, the disregard for the rule of law in some countries requires united and decisive action at European level. With the Russian war of aggression on Ukraine, Europe is facing the question of survival in terms of its values and its political order. The time to complete the European project, which was created precisely to prevent war and despotism in Europe, is now, “states the UEF President. "Right now, the EU is demonstrating unity and determination in the face of this dramatic common threat; but once again its strength is in reaction and has not been in action. EU lacks genuine competences in foreign and security policy, in defence policy, in industrial and energy policy, and in one word it is not politically equipped to act effectively. Even its economic union is incomplete, since we do not have a fiscal union and a federal budget”, Sandro GOZI concludes.

Emmanuel Macron is thus the first President since Jacques Chirac elected in office for a second term. However, the result of the two candidates this time was much closer than in 2017. While the gap between Macron and the right-wing populist candidate in the run-off election in 2017 was more than 30 %, today it is 17 %. „If you take a closer look and include the turnout of 72 %, the election result should be seen as a wake-up call. Especially for us pro-European civil society organisations working to strengthen the democracy and in particular the European democracy, this election result gives a clear mandate and shows the need for even greater engagement at the local level. As Union of European Federalists, we take this mandate and will intensify our efforts in the promotion of European democracy and values. We will also support our UEF-section in France to grow at the local level. However, this is not only a need in France but also in other Member States. If we do not succeed in convincing the citizens of the need of a united Europe, the European project will have no future," says UEF President Sandro GOZI. As a member of the CoFoE, the UEF, which exists for over 75 years, has repeatedly pointed out the special importance of organised civil society in the context of European integration.

In June, Europe will once again look to France for the election of the National Assembly.