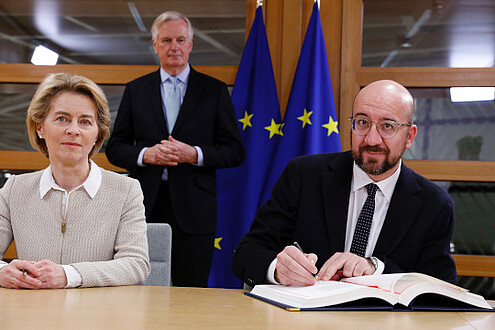 The current crisis, generated by the most serious pandemic the world has seen since the beginning of the 20th century, puts the European Union to the test in an unexpected way. The whole world will be ravaged and every political community will have to show that it has the moral and material resources to start again. We know that the challenge will directly affect the heart of our democracies and the very idea of building a new global solidarity.

As in the aftermath of the Second World War, political responses must be proportional to the dangers that threaten our values, our model of a free, democratic, solidarity-based society, our very future. No state alone in Europe will be able to meet this challenge. Everyone will have to play their part, but only together we can save our civilisation.

Yesterday’s meeting of the European Council, which culminated – after eliciting a number of strong, even bothered reactions, such as that expressed by the Italian Prime Minister – with the "non-decision" (on the crucial issue of financial support to States) to ask the Eurogroup to draw up a proposal, provided yet another example of this situation.

In this occasion, too, many governments have not managed to break away from the short-sighted view of their own very short-term interests, despite the fact that the other European institutions have now understood the need for a common and cohesive reaction. The ECB, the European Commission and the European Parliament itself have made extraordinary interventions in the last two weeks, with the will to use all the room for action granted to them by the Treaties. The obvious crux of the malfunctioning of the EU therefore lies in the monopoly of decisions by the Member States, symbolised by the overwhelming power of the European Council and its inability to find agreements to make the European Union work.

In all this, on the one hand, it is difficult to see at this point what path the Union can take in order to deploy sufficient resources to really support the economies and social policies of the Member States. All assumptions made are either insufficient, or have contraindications for one or the other; but above all, it is difficult to understand how to get out of this dead end due to the fact that solidarity takes place exclusively between States, because the European Union does not have the fiscal competence that would allow a shift to solidarity between European citizens. On the other hand, one of the facts that must be strongly highlighted is that if Europeans urgently need to become a community of united and cohesive destiny, the solution will not be found in the clash between opposing types of national interests, but only by moving to the qualitatively different terrain of the common interest.

The letter of the nine Heads of State and Government sent on 25 March to the President of the European Council, Charles Michel (he too, it has to be said, committed to trying to make governments think more in terms of the common interest), contains, for example, many right points, including the question of "working on a common debt instrument issued by a European institution to raise funds on the market on the same basis and for the benefit of all Member States". This is certainly a necessary proposal, all the more so at this emergency stage. At the same time, under the current conditions, this European institution, which in the proposal of the nine governments should issue debt (and therefore guarantee it), will not avoid to rely on a fund fed by contributions from the States. In this way it is difficult to break out of the vicious circle.

A European debt, in order not to become a divisive issue, should not fall within the scope of simple solidarity between States (which makes the more solid countries feel authorized to speak of conditionality towards those whose debt is more exposed) but should be based on the European guarantee of a federal budget. This is why the strength of the proposal to work on a common debt instrument would be infinitely greater if it were accompanied by that of relaunching federal political union. In this way, it would shift the terrain of confrontation from the current clash of divergent interests to a vision of Europe’s future.

Many people believe that raising the issue of relaunching political union in this emergency phase is unrealistic; but if the deadly risk facing the European Union today is that it will drag itself through the crisis and finally find itself increasingly torn apart, thereby destroying the heritage of 70 years of integration, is it really unthinkable at this time to pose the problem of taking real steps in the federal direction? It is a fact that, in order to save the European Union, there is no alternative to reversing the prevailing logic that drives everyone to seek their own advantage at the expense of the common interest.

Seventy years ago, in this spirit, Jean Monnet conceived the birth of the European Coal and Steel Community. The parallelism with the situation today is very clear. Indeed, the experience of the ECSC teaches us that the solution to the acute crisis can only be found in a project with a strong political value that is capable of reversing the relationship between the Member States and the Union, making the latter autonomous and capable of acting within its sphere of competence.

Today, as shown by the impasse in the negotiations on the Union budget and the possibility of a common debt instrument, the problem that can no longer be postponed is that of giving the Union fiscal competence – even limited initially to a few resources – entrusting it to the political institutions of the Union. One hypothesis is to link resources to “European public goods”, such as the environment; they could therefore initially consist of taxes such as the border carbon tax, with a view to allocating new resources in the future. In any case, this step would create the basis for an autonomous power of government at European level, which would break the current political logic that concentrates power in the hands of the European Council, and could evolve further within the limits set by the democratic control to which the European Commission would be subject.

It is a solution that obviously cannot be based on the existing treaties, which do not confer fiscal capacity on the Union, and which would therefore involve amending the treaties. It is therefore pointless to hide the fact that this is a difficult step, not least because it implies a substantial attribution of sovereignty to the European level. But at this dramatic time, which forces previously unthinkable openings, the European Parliament and the States calling for a Europe that is more united and more capable of action would have every chance of taking up this battle and winning it. It would also be the only way to safeguard and relaunch the prospect of the Conference on the future of Europe, which remains an essential event and which would otherwise be overwhelmed by the crisis.

As Ursula von der Leyen reminded us yesterday in front of the European Parliament, challenging the European Council: We need to focus as soon as possible on “how can we use this storm to ensure that we can weather the next one better”. “History is watching us”, she concluded: “we do the right thing together: with one big heart, not 27 small hearts”.

"Europe at the test of war against the coronavirus", Movimento Federalista Europeo, Italian section of UEF - Statement in PDF here  (In English).