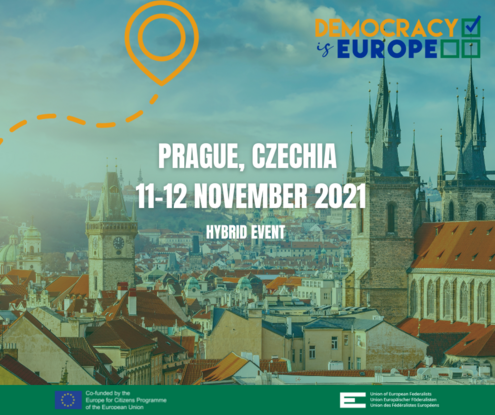 Here we are, our journey throughout Eastern Europe is coming to an end: our last stop? Prague, in Czechia.

November 11 and 12, 2021 we will be retracing the Czech path towards democracy, the Velvet revolution and its outcomes, the EU accession process and the current political trends.

Are you interested in democratic transition, EU integration and in analysing backslide democracy in the region? Join us, REGISTERING HERE.

We are looking for international, local and online participants!

“Backsliding democracy in Central and Eastern Europe” has become a common topic in current political debates. However, Czechia is one of the countries in the region, remaining among the group of the 20% best performing liberal democracies on the globe. With its neighbouring countries, it shares a common history of peaceful revolutions and democratic movements of the late 1980s. Democracy, freedom, and the pursuit of a unified Europe were core demands of these movements. While European values have come under severe pressure in the region, the Czechs have not turned their backs on their values of 30 years ago, the Czech democracy being comparatively stronger than in other Central and Eastern Europe countries. The two-day hybrid event starts with an overview of the path of Czechia in the European Union and a training session with insights into the latest research findings on backsliding liberal democracy in Central and Eastern Europe. The second day starts with personal insights into the Czech peaceful revolution in order to better understand why it strove for European values. The following panel debate will discuss the signs of democratic deterioration, Euroscepticism and populism in Czechia. It will address current challenges to liberal democracy, as well as the question of why Czechia is a more stable democracy than other countries with a Soviet legacy. A final guided tour through the most significant places of the communist period and the revolution – Old Town Square, Narodni, Wenceslas Monument and Charles University completes the program.

15.00 – 16.15 CET  Democracy is Europe: Remember to Revive: 30 years after the end of the Soviet Union,  what can we learn from the transition for the future of Europe?

9.00 – 10.30 CET Experiencing History: How did the peaceful revolution feel from inside?

Moderates: Edit ZGUT, Political scientist and a doctoral researcher at the Institute of  Philosophy and Sociology of the Polish Academy of Sciences (IFiS PAN), DemocraCE  fellow at Visegrad Insight