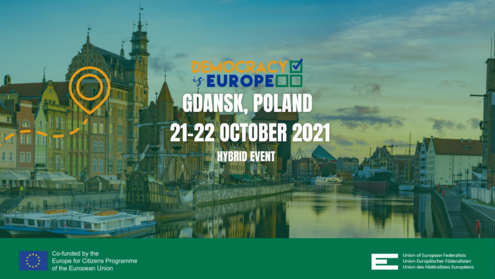 The next step of  UEF’s  travel across Eastern Europe is Gdańsk! This city was the Polish revolutionary centre between the end of the 80s and beginning of the 90s. Here the Solidarności movement, supported by the Catholic Church, played a decisive role in the peaceful revolution and democracy movements.

From here, UEF will try to investigate Polish political history between the past and the present, with a two-day hybrid event. It will overview the path of Poland in the European Union. Participants could discuss with eyewitnesses the role of Solidarności Movement to better understand how current political opponents once strove for shared European values.  Poland is, in fact, the fastest autocratising country in the world. In the last decade, no other country has regressed so much from a liberal democracy to an electoral democracy. Yet Poland, with In the meantime, conservative forces have turned away from the European values once aspired to, such as freedom, democracy and the rule of law.

How can we explain rapid turn away from once common values? More importantly, how can we create a liberal democracy that is not perceived as a threat by conservative forces? Liberal democracy is characterised precisely by the EU’s guiding principle “united in diversity”: Liberals, conservatives, socialists and supporters of other world views all have an equal right to live their interpretation of our common values. To answer these questions, a panel debate with a focus on current challenges to liberal democracy in Poland will take place in the morning of October 22, 2021.

A final training session provides up to 20 democratic activators, with the skills to stand up against populism and ant-democratic behaviours in their daily life.

30 years after the end of the Soviet Union, what can we learn from the transition for the future of Europe?

9.00 CEST - Experiencing History: Poland 1989 memories and developments from the protagonists

10.45 CEST - Panel Debate: From Friends to Foes? The Conservative Renunciation of European Values in Poland

14.00 CEST - Training: How to Fight Democratic Backsliding and Populism in our daily life?

The event is going to be a blended activity with an online and offline (in Gdańsk, Poland) settings, and we are looking for international, local and online participants! For the 5 international participants who are more motivated and want to participate physically, we will cover accommodation expenses, and we will reimburse their travel fees up to 150 euros (per person).

Check our call for more details.