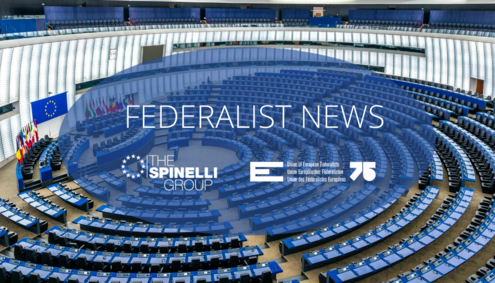 “I would like to thank Brando Benifei for his great work as the president, pushing for a more federal Europe. As Spinelli Group we want to use the Conference on the Future of Europe to inoculate our continental democracy with strong reforms against overstretching in next crises. We want strong reforms for truly European elections, EU investments in a digital and climate friendly future, a Europe that speaks with one voice in the world. We invite all to join our campaign to make Europe stronger by making it more democratic!

The EU is being held back by antiquated decision making processes. We need to get rid of unanimity in the EU Council and we have to push for own initiative rights for the European Parliament. With a European second vote for transnational lists we could make sure citizens have a stronger say which lead candidate is the next Commission president in 2024. We have to make clear that more democracy is the answer to the current crises rocking the European Union.“

Read our manifesto of 2018:
https://thespinelligroup.eu/wp-content/uploads/2021/04/Manifesto_EN.pdf

Read our manifesto for the Conference on the Future of Europe:
https://thespinelligroup.eu/wp-content/uploads/2021/07/SPINELLI-MANIFESTO_V_light.pdf

• Strengthening democracy with a second vote in EU elections for transnational lists, a right of initiative for the EP

Background: history of the Spinelli group