HomeUEFPoliciesSpinelli GroupActivitiesPublicationsMembersNewsJoin UsSearch
Events, 10/07/2022
Welcome to our new member section: UEF Kosovo!
Events, Statutory Meeting, 09/07/2022
Federal Committee in BRUSSELS
UEF, Spinelli Group Website, Conference on the Future of Europe, Events, 29/06/2022
Enhancing European Democracy – Next Steps Following the CoFoE
Press Release, Featured, 24/06/2022
PRESS RELEASE: Ukraine and Moldova’s EU candidacy: Europe needs integration as much as enlargement
Spinelli Group Website, Featured, Conference on the Future of Europe, Opinion Papers, 20/06/2022
UEF President sends AFCO and the Spinelli Group the document with federalist proposals from MFE for the reform of the EU Treaties
The European Parliament confirms the conclusions of the Conference on the Future of Europe and calls for a Convention for the revision of the Treaties - Press Release | 10 June 2022 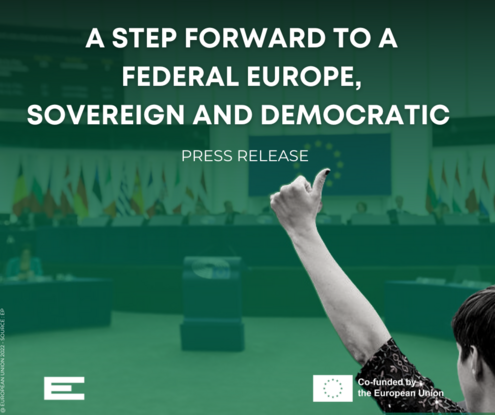 A step forward to a federal Europe, sovereign and democratic
The European Parliament confirms the conclusions of the Conference on the Future of Europe and calls for a Convention for the revision of the Treaties

In the light of the current crises, the European Union has shown not to be a fully democratic and sovereign power. It is one of the main conclusions of the Conference on the Future of Europe (CoFoE), which ended on 9 May 2022. On that day, which celebrated the Schuman Declaration of 1950, European citizens, through the CoFoE conclusions, called on European representatives and political leaders to reform the European Union to make it fit for the challenges of the modern world.

The European federalists are convinced that the starting point of this process is the launch of a Convention that defines the new rules of the European project by revising the Treaties.

Yesterday's vote of the European Parliament endorses the results of the CoFoE and calls on the European Council to initiate the process of revising the EU Treaties, under Article 48 of the Treaty on the European Union, by convening a Convention. The resolution was adopted at the Strasbourg plenary with 355 votes in favor, 154 against, and 48 abstentions.

This vote is a step forward for a more federal, sovereign and democratic Europe, and an important victory for the European federalists. The resolution calls for a reform of Europe’s institutional architecture, an issue that has been the main focus of federalist activity during the CoFoE, through the mobilisation of citizens on the multilingual platform futureu.europa.eu, and the work of its members in the CoFoE Plenary and the Democracy working group.

The resolution includes some of the most important demands for the reform of the European Union, as formulated in the CoFoE conclusions and supported by the European federalists.
In particular:

Sandro Gozi, President of the UEF said: "The conclusions of the Conference on the Future of Europe and the demands of European citizens are clear: Europe will either be democratic and powerful or it will not be. Today, citizens expect a good outcome from the Parliament: we wanted this open debate with them, and now we have to respect our commitments and reform the treaties.
The world has changed, war has returned to our continent and has shown our weaknesses even more. We live in an age of empires where we have to decide whether to exist or disappear: unanimity is the guarantee of our disappearance.”

The European Council will discuss the conclusions of the CoFoE on the agenda for its next meeting on the 23 and 24 June. The European federalists will continue to advocate in favor of the recommendations of the CoFoE and for the convening of a Convention on the Reform of the Treaties, at both national and European levels.