HomeUEFPoliciesSpinelli GroupActivitiesPublicationsMembersNewsJoin UsSearch
Events, 10/07/2022
Welcome to our new member section: UEF Kosovo!
Events, Statutory Meeting, 09/07/2022
Federal Committee in BRUSSELS
UEF, Spinelli Group Website, Conference on the Future of Europe, Events, 29/06/2022
Enhancing European Democracy – Next Steps Following the CoFoE
Press Release, Featured, 24/06/2022
PRESS RELEASE: Ukraine and Moldova’s EU candidacy: Europe needs integration as much as enlargement
Spinelli Group Website, Featured, Conference on the Future of Europe, Opinion Papers, 20/06/2022
UEF President sends AFCO and the Spinelli Group the document with federalist proposals from MFE for the reform of the EU Treaties
A few months before the start of the Conference on the future of Europe it is time for the Union to learn to recognise its mistakes. It is time for the Union to learn the lessons of its founders, starting with Robert Schuman and his Declaration, whose 70th anniversary this year we must celebrate by launching a major European reform. The EU must quickly get out of the current situation and think about the present and even more about its future. This means new policies and new concrete solutions. But at the beginning of a new decade, it also means new institutions. This desire for political renewal is inextricably linked to the drafting of a new treaty. 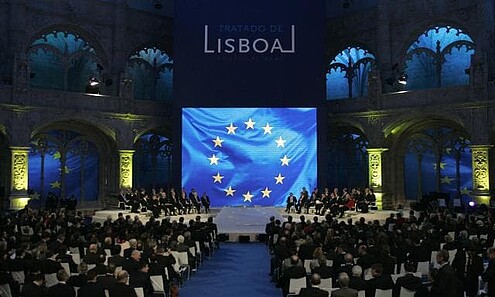 The Treaty of Lisbon, which entered into force just over ten years ago, has made it possible for Europe to make progress, but it has also shown that it has had its day. Born out of the failure of the project establishing a Constitution for Europe, it has incorporated about 80% of its content. The Lisbon Treaty was the result of the new Franco-German tandem composed at the time by Angela Merkel, who in 2007 was eager for a success during the German presidency of the EU during the first half of that year, and Nicolas Sarkozy who, as soon as he was elected to the Elysée Palace, wanted to implement his idea of a 'mini-treaty' to close the institutional crisis caused by the double French and Dutch 'no' in the referendums of May and June 2005.

The Irish in 2008 and 2009 managed to approve the treaty by referendum on the second attempt. The Polish and Czech presidents were against it. The Germans had to wait for the decision of the Constitutional Court in Karlsruhe which, once again, brought the game to extra time. By many, the Treaty of Lisbon was presented as a miracle solution to replace the one adopted under disastrous conditions in Nice in December 2001. And without doubt, the Lisbon solutions on various matters were more effective than those of Nice.

The Member States ratified it by common agreement through parliamentary channels. And many were convinced, mistakenly, that they had learned the lesson of the failure of the European Constitution. It was a perfectly legal way, but one that exposed itself to harsh attacks from the point of view of legitimacy.  Denounced by opponents of the European Constitution as a 'betrayal of democracy', the Lisbon Treaty never benefited from the recognition it would have received from popular approval, which in fact continues to be lacking.

Already unknown in its essence, the European construction certainly does not need more complexity. On the contrary, it is perceived as increasingly complicated. For this reason too, Europe suffers from a loss of confidence on the part of its citizens, of which Brexit is only the most visible face of a drift with distant roots.

A few months before the start of the Conference on the future of Europe, which must lead to major political reform, it is time for the Union also to learn to recognise its mistakes. It is time for the Union to learn the lessons of its founders, starting with Robert Schuman and his Declaration, whose 70th anniversary this year we must celebrate by launching a major European reform. Because we cannot pretend that we are always and in any case satisfied with the Europe that exists, not least because this attitude runs the risk of doing above all the interests of those who only want it to disappear. Faced with all the more or less justified complaints to which it continues to expose itself, the EU must quickly get out of the current situation and think about the present and even more about its future. This means new policies and new concrete solutions.

But at the beginning of a new decade, it also means new institutions. So let us dispense with the useless prudence and the usual concerns of those who always evoke the risk of opening Pandora's box and seriously undermining a status quo as accommodating as it is hypocritical.  All Europeans of heart and conviction have no choice but to take the initiative for truly democratic change in the EU.

If there is a democratic Europe, there must be a President representing it, chosen democratically: the election by direct universal suffrage of the President of the European Commission is necessary, and sooner or later it must be introduced. In order to be heard and carry its full weight within the EU and on the world stage, the EU deserves to be represented by a leading personality. Only if it has undeniable political legitimacy will it be able not only to defend the values of respect and progress that have given life to the European dream, but also to oppose those who want to destroy them. And supranational democracy needs real transnational politics: that is why in 2024 we should be able to vote on transnational lists in a single European constituency: because we will only be able to have real European political movements if they are voted directly by the citizens of Europe. That is why we must get out of the status quo. That is why we must go beyond the Lisbon Treaty. We will displease the Eurosceptics, but it will be to the benefit of the whole of Europe and its citizens.