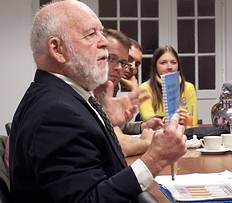 During this debate Prof. Schwartzberg pleaded for the readjustment of the “one state = one vote” system and for the introduction of a “weighted voting system”, which would be more representative of the world’s distribution of power.

A passionate debate ensued between Prof. Schwartzberg and UEF and JEF members on the feasibility of implementing his plan for UN reform in the face of “great powers” unwilling to give up their veto right in the Security Council.
Recommend this:
© 2019 Union of European Federalists
Sitemap | Contact | Jobs | Privacy| Search